Covid hits business at Arena Events, which puts temporary facilities in place for events from Cheltenham to Wimbledon and the Open 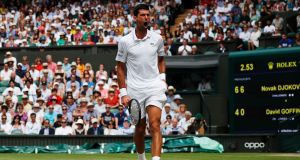 An Irish-led supplier of temporary facilities for major sporting occasions, such as the Cheltenham racing festival and Wimbledon tennis championships, has raised £9.5 million (€10.5 million) in an emergency share sale to tide it over as Covid-19 forces the cancellation of a slew of events.

London-listed Arena Events Group, which provides everything from seating and furniture at weddings to VIP hospitality structures for major golf tournaments , has also been allowed by its bank, HSBC, to draw down an additional £4.75 million from its loan facilities.

In the meantime, the company, led by Irish chief executive Greg Lawless, has been promoting a new line of business during the coronavirus crisis, offering temporary structures to governments, including drive-through Covid-19 testing sites, as they deal with rapid spread of the virus.

“The funds raised will allow the group to continue operating as it navigates its way through this difficult period,” said Mr Lawless, who led the company’s flotation in 2018.

“We have been working tirelessly to implement plans to limit the human, financial and commercial consequences of this terrible health disaster on all Arena stakeholders.”

While Arena has been hit by a raft of cancellations of sporting events and exhibitions, the company moved swiftly to cut its running costs in recent weeks to help weather the current crisis.

As far as it knows, the company said, two of its key earners – Wimbledon, scheduled between June 29th and July 12th, and The Open golf championship at Royal St George’s Golf Club in Kent in mid-July – are still going ahead. The organisers of Wimbledon will make a decision on the grand slam event next week.

“The 13-week cash flow projections are not dependent on the championships at Wimbledon or the Open going ahead on schedule,” it said.

Arena is also assuming that major events proceed as scheduled in the late summer and early autumn.

Several events that it supplies, such as the Hong Kong Sevens rugby tournament, motor racing fixtures, golf competitions and tennis championships, have been postponed from the first-half of the year to later in 2020, it noted.

Saudi Arabia’s TasHeel Group, which provides visa, travel, concierge and other services, has subscribed almost two-thirds of the new shares being issued, giving it a 24.2 per cent stake in Arena.

The remainder were placed with Swiss private bank Lombard Odier, resulting in its stake being lowered to 23.1 per cent from 25.1 per cent.

Mr Lawless’s own holding will be diluted to 3.8 per cent from 4.6 per cent, according to documents published on Thursday in relation to the equity raise.