Making business a force for good 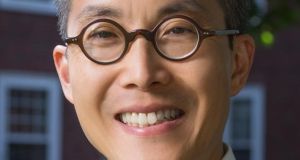 Growing concerns about the power of individual corporations and the pace of change in the digital economy have led to calls for a new ethical code to make business a force for good. This will be the subject of the Laurence Crowley Lecture to be delivered by Professor Nien-hê Hsieh at the UCD Michael Smurfit Graduate Business School on Monday, October 1st next.

Prof Hsieh is associate professor of business administration at Harvard Business School and a former president of the Society of Business Ethics. He has explored this question in a number of academic papers in recent years.

“Technological innovations in the digital economy are rapidly reshaping the business landscape,” he says. “While many of these developments are welcome, they also bring with them many concerns, including concerns about privacy, political stability, income inequality and the loss of work. The starting question is if they raise ethical challenges. That’s the premise I’m interested in exploring.”

He points out that these questions are not necessarily new. “We have seen the displacement of work in the industrial revolution and we have seen calls for things like basic income guarantees for those who can’t access work,” he says.

“The issues may not be new, but they are different in degree. What is different about the digital economy is the speed and scale and scope of the change. The areas of life affected are much more pervasive than before and the scale at which one company can effect change has grown massively. The impact companies can have is quite dramatic.”

His solution to how companies can wield this increased power ethically is for them to go back to basics. “There are three components to the approach,” he says. “The first is to get businesses to think seriously about the harm that they do. If one looks at the literature on management training, there is so much emphasis on having a positive social impact, on improving lives and local communities, and so on. That is very important, but it can overlook or downplay the fact that lot of good could be done if the business focused on reducing the harm it did.”

In fact, the case could be made that corporate social responsibility (CSR) is a kind of book-balancing exercise used to offset the harm companies do in other areas. That would certainly not be the case were the focus on doing no harm in first place.

Hsieh acknowledges that some harm is unavoidable in the course of normal business. “Competition harms competitors, for example. Every action causes some harm, but companies need to think seriously about the harm they do and look for ways to reduce it.”

The second component to the approach is a renewed focus on core activities. “They need to think about what their core activity is about. While not forgetting that the business is a commercial activity which has to generate a return on capital they should look at the social impact of their activity. There are ways that they already benefit society such as paying wages and salaries. They should seek to carry that core activity out as best they can while producing and selling useful goods and services responsibly.”

The third element is the role of civic society institutions such as governments, local authorities, public bodies and so on. “Right now, there are discussions in the US around business having a direct role in society,” Hsieh says. “Domino’s Pizza has been filling in potholes in a US city and putting Domino’s logos on them. It’s good that the potholes are being filled but it can make us forget that there is a reason for civic institutions. Businesses can’t overlook the importance of civic institutions and they should seek to establish appropriate supportive relationships with them.”

But how can this new set of ethical standards be introduced to business? According to Hsieh the answer lies with the individuals working in an organisation. “Most people say that there are limits and lines they wouldn’t cross in the pursuit of profit. And these aren’t just legal limits. Once we agree that there are some standards that’s the starting point. To be honest, many businesses do care about societal issues, but one of the things about the back-to-basics approach is that is directed towards individuals in their role as individual decision-makers. It’s about getting people to think about their individual decisions and to do no harm. It’s a fundamental question of being ethical.”

The essential point here is that corporations don’t have a conscience, people do.

External factors such as regulations, consumer behaviour and shareholder pressure also have a role to play.

“Back to basics makes it easy to focus on the core business,” Hsieh concludes. “The problem with CSR is that it overcomplicates it and asks them to take on activities which should be the role of the state. Back to basics simplifies it and allows companies to concentrate on core activity and doing it well while doing no harm. That’s part of the appeal of the approach.”