Successful firms spawn clusters, not the other way around, says Gary Pisano 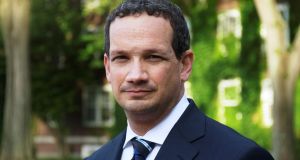 Prof Gary Pisano: “You need an entrepreneurial ecosystem that will spawn a lot of firms followed by a fairly attritional process of Darwinian selection. I don’t want them to co-operate. I want them to intentionally compete.”

One of the core goals of Irish industrial policy for the past two decades has been the development of a self-sustaining life sciences cluster in this country. This would see a critical mass of world leaders in the fields of medical devices, pharmaceuticals, biotechnology and related sectors locate here and, in the process, turn this country into a magnet for the very best research and engineering talent.

That’s the theory – and it works. Life sciences clusters in California, Massachusetts and Israel have proven it. The difficulty lies in creating the cluster in first place. How do you get these world-class enterprises to gather in one place to begin with?

This subject will be tackled in the UCD 2016 Laurence Crowley Lecture on October 10th next. Presented by UCD Michael Smurfit Graduate Business School in association with Perrigo, the lecture will be delivered by the internationally renowned Prof Gary Pisano, Harry E Figgie Professor of Business Administration at Harvard Business School, who will share his views on how research on clustering suggests policymakers may have been getting it wrong up until now.

Strong life sciences clusters emerge from the convergence of two types of ecosystems: a deep and diverse scientific ecosystem and a vibrant and competitive entrepreneurial ecosystem. Public policy efforts often focus on the former, with the assumption that the latter will follow.

Pisano’s research, however, suggests otherwise. He contends that successful firms help spawn successful clusters, not the other way around. As a consequence, he argues that policymakers interested in spawning successful life science clusters “need to focus on facilitating the growth of both types of scientific and entrepreneurial ecosystems and their convergence.”

Fuel for the cluster

He compares the development of clusters to rocket launches with the ignition phase coming first. “In the ignition phase you need scientific breakthroughs to act as the spark”, he says. “The science is the fuel for the cluster. You then need companies to start up very quickly around that, you need that entrepreneurial element. After that comes lift off.”

It is perhaps in this phase that he differs most from many of the policymakers. While most mainstream policies aim at high levels of co-operation between firms and other elements of a cluster with almost a communitarian vibe to it, Pisano believes in the opposite.

“You need an entrepreneurial ecosystem that will spawn a lot of firms followed by a fairly attritional process of Darwinian selection,” he argues. “I don’t want them to co-operate. I want them to intentionally compete. This might mean that only one in ten or one in a hundred firms survive and go on to be successful. But the evidence shows that these firms go on to spawn spin-offs. The best preforming firms produce the best performing spin-offs.”

These spin-offs tend to be established by people who leave the firms to start their own businesses. Frequently, they leave having accumulated a fair amount of personal wealth as a result of share options and so on and this can be invested in their new start-up enterprise.

Funding for local scientific institutions is also important, of course. “When you look at the universities where the discoveries have been made, the professors who make the discoveries tend to stay there. Some move on but the vast majority stay and contribute to the scientific ecosystem.”

The barriers between the commercial and scientific communities need to be quite low as well. “In both Boston and the San Francisco Bay area there is strong history and culture of collaboration, with institutions like MIT and Stanford having very strong commercial linkages.”

Having put the commercial and scientific foundations in place, the third key ingredient is talent. “This is a big issue in Europe when clusters do get started. They don’t need financial capital. There is plenty of capital around. The real challenge is human capital. For small countries like Ireland this is a particular issue.”

He believes that means much greater encouragement of immigration in order to fulfil the needs of a growing life sciences culture.

His final point also relates to human capital and what he sees as a constraint to spin-off activity – non-compete agreements. “These agreements are one of the things that stop spin-offs from happening. If you stop people leaving firms from starting up their own businesses that is a problem. In the US these agreements are unenforceable in some states. In Europe you should look at making them illegal or unenforceable.”

He also notes the impact of personal tax structures in attracting people both to work in certain locations and to start up new businesses in them. “The rate of capital gains tax in relation to income tax is very important”, he notes. “Start-ups tend to be cash-poor and people will get paid with equity. In the US we have quite a low rat of capital gains tax which makes it quite attractive for people to be paid in this way and to take their capital gain later and invest it in a new start-up. In Europe you have quite high rates of capital gains tax and this can represent a problem.”