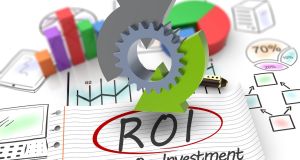 R&D and return on investment: in uncertain times, there is no better place to invest than in innovation.

This places Ireland at a significant disadvantage to many of its main competitors but the picture is not quite as bleak as it might first appear. “Total expenditure on R&D in Ireland in 2014 was €2.8 billion,” says BDO tax partner Derek Henry. “We are going in the right direction in terms of expenditure and the Government’s Innovation 2020 programme is trying to drive that forward.

“We also do quite well when it comes to performance,” Henry adds. “The 2016 European Innovation Scorecard put Ireland in seventh place overall and ranked us as a strong innovator – just outside the innovation leaders category.” Very encouragingly, Ireland was ranked first for innovation in small and medium-sized enterprises.

Science Foundation Ireland director general Mark Ferguson points to other good news. “According to Eurostat, Ireland is the most R&D efficient country in the EU,” he says. “We extract the most innovation output for our below-average spend. We have to accept that our overall spend is significantly below the European average and we shouldn’t be happy about that but our overall performance is a great platform to build on.”

The overall spend on R&D is divided about two to one between the private and public sectors respectively. “This is about the right ratio,” says Ferguson. “And it means that we need to grow spending in both areas. The EU target is 3 per cent and Ireland is just about half-way there at the moment. Our target under the Innovation 2020 programme is to reach 2.5 per cent by 2020. That means almost doubling what we are doing by putting an additional €2.5 billion into the system. We just need to stimulate investment.”

Ferguson puts the current expenditure figures in the context of the economic climate over the past number of years. “Overall our performance is very good considering the fact that we have had a static budget for the past five years,” he says. “Credit should go to the Government for maintaining that spend over the period and industry has responded. We have been climbing the international rankings within static budgets but there does come a time when you have to put more fuel in the tank. We are only spending 1.5 per cent of our national income on our future.”

The time has come for the State to loosen the purse strings, he believes. “I’ve always said I would never advocate for more budget until we had put the house in order. Well, the house is now in order. This is all about the future; it’s about training our young people; forming new companies; attracting companies to Ireland; and encouraging companies here to grow and expand. In uncertain times there is no better place to invest than in innovation.”