The science of everyday things 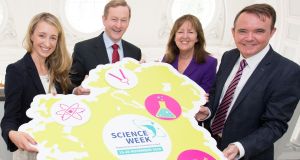 Just about anything you were ever curious about or want to know more about will be covered by Science Week 2016 which kicks off on Sunday. Everything from high performance sport to the power of literature to make us fall in love will be covered in the more than 120 different events which will take place nationwide as part of this annual celebration of all things scientific.

But anyone who thinks that the Science Foundation Ireland (SFI) sponsored festival is just for scientists and techies would be very wrong. It’s not about labs or white coats according to SFI director of strategy and communications Dr Ruth Freeman. “It’s about the science of everyday things, the science of the stuff that you’re interested in.”

She points to the Science of World War 1 lecture in the National Library of Ireland on Monday, November 14th at 7pm as an example of this. “War is a time of huge technical advance as well as enormous suffering,” she says. “Professor Dermot Diamond and Dr Jennifer Edmond will look at how the Great War spawned new advances in many area of science that still impact our lives today.”

The science behind fashion will be explored at the Decoding Fashion event at the Science Gallery in TCD on Tuesday, November 15th. “The event will look at areas such as new technology in clothes and fabrics. New developments in wearable technologies as well as other areas such as 3D printing, e-commerce, and the internet of fashionable things will also be discussed.”

With Ireland’s stunning and historic victory over the All Blacks still fresh in the memory there is sure to be strong interest in the Peak Performance - The Science of Sporting Success event at the Royal Hospital Kilmainham on Thursday. The event will look at the role nutrition really plays in on-and-off field performance; why it is so important to create a winning mentality; how our bodies cope with physical extremes like the summit of Mount Everest; and the long-term effects of elite sports. Leading experts in sports performance, nutrition and physiology will uncover the truth behind pushing your body to the limit and what it really means to live a healthy lifestyle.

Rest is also very important, of course. “One subject very close to my heart is sleep and ‘While You Were Sleeping - The Science of Sleep’ in the Athlone Little Theatre on Friday will look at why sleep is important, the how and why of our sleep, sleep disorders and insomnia and how we can all sleep better. It will also answer questions about why we don’t sleep well and what the optimum amount of sleep is.”

Children are well provided for during the week. One event sure to fascinate and delight in equal measure is The Science of Bubbleology with Scientific Sue at the Royal Hospital Kilmainham on Thursday. Have you ever wondered why bubbles float? Why we can see rainbows in bubbles? Why bubbles are round? Can we make bubbles in other liquids? What is the secret behind big bubbles? Scientific Sue will answer all these questions and more and with the help of lots of volunteers she’ll show an amazing range of incredible bubble tricks and the science behind them.

Events aren’t confined to Dublin of course and alongside the individual events taking place in venues throughout the country there will be science festivals in Galway, Limerick, Kerry, Cork, Waterford, Cavan-Monaghan, Sligo, and Mayo.

And for those who can’t make it along to an actual event RTE is weighing in with an extensive schedule of science programming during the week. “We’re presenting a slate of content during Science Week across all of RTÉ’s platforms that aims to inform and entertain and which, as such, is at the heart of our public education purpose,” says Colm O’Callaghan, genre head for Irish language, education & science.

“Working closely with Science Foundation Ireland, the Broadcasting Authority of Ireland and other key stakeholders, this is a timely initiative that reflects just some of what’s happening in the world of science and technology in Ireland, while also taking an important look at where the nation may be headed in that respect.”

Among the highlights will be Hacked on RTÉ One at 9.35pm on Monday 14th November. Authored and presented by Keelin Shanley the programme looks at the growth of cyber-crime and asks if it’s impossible to be fully safe and secure on-line.

In Making Ireland Click on Monday November 14th on RTÉ One at 7:30pm, David Puttnam looks at how the town of Skibbereen in West Cork is using science and technology to give itself a fighting chance of survival in an increasingly digital age.

Award winning series, 10 Things to Know About returns on Monday at 8.30pm to showcase the weird and wonderful science behind aspects of modern life in Ireland while later at 11:35pm Ladies of Science is a drama documentary, set in Ireland, which tells the true story of two remarkable women, Lady Mary Rosse and Mary Ward, who had a passion for science and technology, including photography, astronomy, microscopy, illustrations, architecture, all during a time when women were not admitted to universities.

For younger viewers, Phil the Science Guy will make an appearance in the new RTÉjr series, POP Goes The Weekend, beginning Saturday 19th November, while Swipe TV and the Swipe TV app will feature a range of science-themed content throughout the week.

“This is the 21st year of Science Week and it is the biggest with more events than ever before”, says Freeman. “Many of the 120 events taking place this year have been organised by local communities who are taking part for the first time. This is very encouraging and shows that science really is for everyone.”