Start-ups must embrace R&D potential from day one 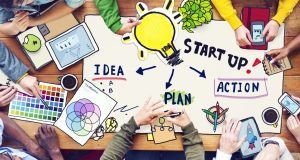 Enterprise Ireland’s entrepreneurs can avail of mentoring support and schemes such as its innovation voucher programme.

If the indigenous sector is to engage in research, development and innovation, it has to be supported in doing so from start-up stage on.

“Enterprise Ireland helps from preconception all the way through,” says Tom Early, who works with the State business development agency’s high-potential start up (HPSU) unit. This starts as far back as the framing of an initial business concept, through to market validation, the creation of a minimum viable product (or service), investor-readiness and on, hopefully, to growth and international scale.

In some cases some of this work is done through supporting the commercialisation of third-level research. In others it could be an entrepreneurial individual getting in touch to say they have an idea. “We’ll get them to send in an outline business proposal which we will then thrash out with them and either say you’re too early or perhaps direct them to their Local Enterprise Office, or to a New Frontiers programme or business accelerator to help them develop it.”

Enterprise Ireland also provides support for start-ups in the form of its Competitive Start Fund. This enables a business receive a blend of development support plus investment worth up to €50,000. Enterprise Ireland provides further support to start-ups and early-stage businesses through its funding of such agencies as the Business Innovation Centres around the country and the Halo Business Angels Network (HBAN).

With all of these initiatives, the aim is to foster a high-potential start-up, that is, a new business with the potential to develop an innovative product or service for sale on international markets, that has the potential to create 10 or more jobs and €1 million or more in sales within four years of starting up.

Along the way, Enterprise Ireland’s entrepreneurs can avail of mentoring support and schemes such as its innovation voucher programme, which can bag them €5,000 worth of research assistance from a third-level institution, to help them develop a new product or service. Feasibility grants of up to €15,000 are also available on a matched funding basis, as are capability development programmes such as Sprint, all of which are designed to ensure sustainable entrepreneurship.

Enterprise Ireland is fourth globally in terms of seed venture capital spending, says Early. This is despite being a development agency whose metric in assessing investment in early-stage businesses includes the potential for job creation – not something of concern to a typical venture capitalist.

Last year Enterprise Ireland invested €32 million in start-ups, of which 101 went to HPSUs and 128 to Competitive Start Fund recipients. “Our primary objective is to use money in the most efficient way possible to create more jobs,” says Early.

The tax code is also used to support sustainable entrepreneurship, particularly for businesses looking to grow through engagement with research, development and innovation. “We work with lots of small companies, as well as multinationals, and over the years have been trying to spread the word that R&D is not something just done by people in white coats,” says Damien Flanagan, director in the R&D tax incentives practice at KPMG.

Investment in R&D can be particularly tax-advantageous to small firms, he points out. “The R&D tax credit allows a tax incentive equal to 25 per cent of qualifying R&D expenditure, and in the majority of cases for indigenous Irish companies undertaking R&D, the highest cost involved are salary costs. The fact that you can claim this credit for salary costs makes it very significant. For a software company, for example, salaries can typically make up as much 70-80 per cent of total spend.”

The relief can also be set against certain utility costs, as long as they are consumed in relation to the R&D activity taking place, as well as the cost of raw materials if, for example, you are a life sciences company using chemicals as part of your R&D. It can also be applied to some capital costs, such as the acquisition of certain machines or computers engaged in the R&D.

In this way, Ireland’s tax treatment of R&D compares well with those of the UK, where you can’t claim against utility costs, for example, and which has a two-tier relief of 26 per cent for smaller companies but 8.85 for larger ones, he says. “Also, where companies are not paying tax, the tax credit is repayable in three instalments over three years, which can really help cashflow for small business, and again, that’s an element of R&D tax policy that other countries don’t have.”

The advent of the Knowledge Development Box is also to be welcomed, he says. This is the name of the special tax treatment of the intellectual property of companies that have undertaken R&D here, filed a patent or copyrighted software. It allows profits here to enjoy an effective tax rate of 6.5 per cent. “That’s half the headline tax rate,” says Flanagan. “While all the attention at its launch was in relation to multinationals, in fact it is well set up in favour of indigenous businesses that do all of their R&D here and derive their income here, a fact which I think has gone largely unnoticed.”

Having been introduced just last year, the value of the Knowledge Development Box will only become apparent in September, when companies start to avail of it when filing their corporate tax. “Given the right circumstances it will be quite valuable to Irish companies,” says Flanagan.

Science Foundation Ireland is helping foster research, development and innovation in enterprise through its industry fellowship programme, designed to enhance industry-academia links through the funding of collaborative industry-academia research projects.

Fellowships can be awarded to staff and postdoctoral academic researchers based in Ireland, wishing to spend time in industry worldwide, at a value of up to € 100,000.

It has been particularly helpful for the indigenous sector here, points out SFI director general Prof Mark Ferguson, as more than 90 per cent of the 3,000 researchers funded each year will go on to work in the private sector. Just 10 per cent go back into academia.

“From a young researcher’s point of view, you don’t know what it’s like to work in the private sector and chances are your supervisor won’t know either, and might even be prejudiced against it, so SFI will fund one year to work in a company on research anywhere in the world. The vast majority stay in Ireland, and a fair percentage go to work in indigenous companies,” he says.

It’s of particular value for smaller businesses. “For most SMEs, the part of their outgoings is wages, and here’s a way in which SFI will pay a salary for someone to undertake research for you, for a year, giving them an opportunity to engage in high-level research, with no restrictions as to how many fellowship holders they can have.”

Of the first 100 SFI fellows that went out into industry, all 100 were offered jobs by the company that hired them. Half took it and, of the other half, 25 went to work for a competitor, while others went on to either work in small businesses or found their own. Just one person of that 100 went back to university.

“For the SME and indigenous sector, it’s a great scheme because it offers a way to sample R&D on a small scale and if you like what you see you can move into partnership programme,” says Ferguson.

The SFI also funds research centres of scale around the country, bringing industry and researchers together across a range of specialities from food to pharma. There are 12 of these, with four new ones having just been announced. Currently these centres are involved in more than 500 collaborations, half with multinationals and half with the indigenous sector.

The challenge facing SFI is ensuring it has enough budget to keep pace with demand for this kind of advanced research collaboration. Brexit on the other hand, though viewed as a challenge by almost every other sector, may actually be a boon for research.

“It is estimated that there are around 30,000 foreign national researchers in the UK who would not qualify for a visa, and who may well be keen to come here,” says Prof Ferguson. “We don’t need 30,000, but a few star people could be transformational.”