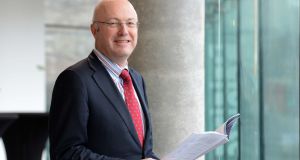 Prof Mark Ferguson: “In five years time a lot of things that we do now won’t be done any more. But there will be a whole stack of things that will need to be done that aren’t done now. Photograph: Eric Luke

Ireland’s performance in science and innovation over the next five to 10 years will determine our place in the world – that’s the view of Science Foundation Ireland director general Prof Mark Ferguson.

“The achievement of sustainable development goals, continued economic growth, and the creation of new jobs for our children will all be dependent on it,” he says.

“Research and innovation matter for the future, particularly for Ireland, ” he says. “More than 57,000 Leaving Cert students got their results last week. What sort of jobs are they going to get in five years’ time or so when they enter the workforce? In the last few years have gone from high unemployment of more than 15 per cent to near full employment. The key to maintaining that is to continue to increase productivity and competitiveness. That’s where science and innovation make the difference.”

The contribution extends further than the purely economic, however. “There is good data to show that science and innovation contributes to the economy in a variety of ways. But it also goes beyond the economy in terms of enlightenment, discovery, underpinning our vales, our sense of our place in the world and so on. It helps us solve the big societal challenges. It will help us build the smart, low carbon, environmentally friendly, circular economy which we will require in the future. We all want rewarding work, we want a fair society, we want a healthy environment, we want clean oceans and so on – and science and innovation contribute to all of these.”

They will also central role in shaping our world in the coming years. “We are going to see the economy change and technology advancing more and more rapidly,” says Ferguson. “When you look at that, it creates more opportunities than it destroys. But it displaces a lot of activity as well. In five years time a lot of things that we do now won’t be done any more. But there will be a whole stack of things that will need to be done that aren’t done now. If I had said to my father there would be careers in developing games for people, he would not have believed it. But now we have apps for gaming, for entertainment, for shopping, for getting around and so on. Life has changed massively and will continue to do so. We will see advances in virtual reality, artificial intelligence, data analytics and so on and they will create new opportunities.”

Science and innovation can be transformative for society as well, he believes. “In the current century we have continued to see people move from rural locations to cities in search of higher value work. All that is going to change. Robotics, drones and sensors will turn farms into smart businesses. Modern technology can be deployed in a way that is very different to how it has been since the industrial revolution where we have had high densities in cities. That makes it even more important to have a highly educated public. It is also important to be innovation leaders and it is heartening to see that Ireland has come up the scale in that regard over the past 10 to 20 years.”

Ireland is starting from a good place when it comes to taking on the challenges it faces in the coming years, he concludes. “Ireland has been increasing investment in research and innovation and we need to continue that. The new Disruptive Technology Fund and the Climate Action Fund are examples of this and we need more of it. We are not starting from a bad place. There are lots of good things happening. The world is a very uncertain place and in uncertain times there is no better place to invest taxpayer’s and shareholder’s money than research and innovation. Your chances of success are very high if you are at the cutting edge and have something that others want. On the other hand, if you don’t invest in research and innovation your chances of success are very much lower.”