Report calls for doubling of EU spending on research 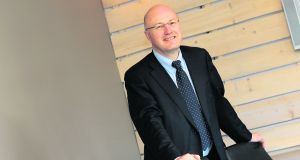 Professor Mark Ferguson: “We need to mobilise and involve citizens so that they become more engaged in research and innovation. We need to develop a greater recognition of the value of research.”

A new report has called for the doubling of EU expenditure on research and innovation and the establishment of a European Innovation Council to maximise the impact of EU research investments.

The “LAB - FAB - APP: Investing in the European future we want” report was produced by the High Level Group on Maximising the Impact of EU Research and Innovation Programmes, otherwise known as the Lamy Group after its chairperson, former WTO director general Pascal Lamy.

The group was formed in December 2016 by the European Commission and its 12 members (which included Science Foundation Ireland director general and chief scientific adviser to the Irish Government, Prof Mark Ferguson) were drawn from different backgrounds including universities and research organisations, major industrial concerns, high growth SMEs, and civil society organisations.

“Research and innovation matter for our future,” says Prof Ferguson.

“Increasing investment in these areas both at an EU and national level is critical to generating economic growth and societal benefits. Research will be at the heart of improving productivity, boosting the competitiveness of the European economy, and delivering tangible improvements to our quality of life.

“By doubling the EU research and innovation budget post-2020 and significantly increasing national expenditure, there is a real potential for Europe to be a global innovation leader.”

That doubling of expenditure is the first of 11 separate recommendations made by the group.

“Each member of the group has been given responsibility for championing one of the recommendations,” Ferguson adds. The recommendation assigned to Ferguson is the one which says that the EU should adopt a mission-oriented, impact-focused approach to address global challenges.

“EU programmes should be about the big missions while the smaller ones can be left to individual member states,” he says. “This could see a unified European approach to tackling the UN sustainability goals for example.”

Another recommendation relates to education and training.

“We need to educate for the future and invest in the people who will make the changes,” he says. “It’s about bringing research and education together in EU programmes. If you don’t have the people the system can’t work properly.”

The programmes themselves should be designed to have greater impact, according to another recommendation.

“In this respect, the report is recommending the EU copy many of the things which we are already doing in Ireland. We have been in the impact game for the past five years.”

Several of the recommendations deal with rationalisation and simplification of EU programmes.

“There are multiple funds all supporting research and innovation,” Ferguson explains. “It would be better to bring these together and have a number of different support instruments to choose from. These could be direct grants, loan finance or other forms of assistance. The Horizon 2020 programme has done a good job in terms of simplifying the processes and procedures but more needs to be done.”

The need to communicate the value of research to EU citizens is also covered.

Another interesting recommendation would see greater internationalisation of the research effort.

“While some countries are turning inwards the EU should be more outward looking and the successor to Horizon 2020 should be open to researchers throughout the world. We want the best brains in the world to be attracted to Europe.”

The launch of the report coincided with a breakfast meeting in Brussels for Irish research leaders jointly hosted by Science Foundation Ireland and Enterprise Ireland. The event was held to highlight the success to date of Ireland’s participation by researchers and enterprises in the Horizon 2020 Programme.

Ireland boasts 980 successful Horizon 2020 applicants so far, ranging from young research fellows through to high-tech SMEs and multinational corporations using Horizon 2020 as a business opportunity. Together they have won funding of €424 million.

“We wanted to recognise all those people in Ireland who have made such a big effort to win this funding,” says Ferguson.

“At the outset of the programme we set a target of €1.25 billion in funding, twice the amount won under the seventh Framework Programme. It is great to be able to say that we are on track to achieve that target. A lot of people thought I was nuts when I set that target but the good news is that Irish researchers and companies are well on the way to achieving it.”