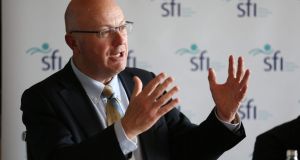 Science Foundation Ireland director-general Prof Mark Ferguson says the success of the Irish research centres is in part due to the focus on basic as well as applied research.

The €230 million in SFI funding is being matched by support from 170 industry partners who have committed to investing more than €230 million in cash and in-kind contributions over the next six years. “The centres will also be expected to raise as much again from competitive non-Irish exchequer funding sources and for that you can read EU funding,” says SFI director-general Prof Mark Ferguson.

This represents a considerable increase on the funding for the original seven centres which were established in 2012. “Funding for those seven was €159 million and this has increased to €230 million for six,” says Prof Ferguson. “The centres were subject to international peer review after two years and again after four years. We set the bar really high for them to be able to apply for a second round of funding. They had to be within the top half dozen and preferably within the top three of such research centres around the world in terms of discoveries, academic papers, benefits to industry, public engagement and so on.”

Pointing to the achievements of the centres to date, Prof Ferguson mentions the APC Microbiome centre, which strives to understand the complex relationship between diet, the microbiome and our health status. “This is very important to the food industry and the health sector,” he says. “If you take the academic measure of the number of researchers in the top 1 per cent in the world for citations, APC Microbiome has 10 out of 30 worldwide, or 30 per cent of them, in its field. That’s a measure of its global academic standing.”

The Insight Centre for Data Analytics is engaged in world-leading research in the field of big data. “The centre has spun out a number of successful companies and is engaged in very important research aimed at addressing significant challenges in areas such as climate change,” Prof Ferguson notes.

Amber, the Advanced Materials and Bioengineering Research Centre, continues to build on core expertise delivering world-class materials innovations, in partnership with industry, and translating these into impacts with environmental, clinical, economic and societal benefits.

“Professor Valeria Nicolosi of the Amber centre has been awarded funding for her sixth European Research Centre project,” says Prof Ferguson. “No one else has ever done that. She is working on very important research on flexible paper batteries and other aspects of battery technology that increase capacity and extend life.”

The Irish Photonic Integration Centre is engaged in research into the generation, manipulation and utilisation of light and new applications for it including autonomous vehicles, micro-displays and medical devices.

“The centre has done some really interesting work on the development of very small, low power LED devices that emit extremely bright light. That resulted in the creation of a spin-out company which was bought by Facebook’s Oculus division,” says Prof Ferguson.

MaREI undertakes research related to energy transition, climate action and blue economy and uses this to support industry and society in the shift to a low-carbon economy. “If you look at this area, it is characterised by a large number of small companies. MaREI has helped those companies by supporting their research capability and assisting them in winning EU funding for projects. We need a road map for how we are going to deal with climate at change. It is a science and engineering problem and MaREI is at the forefront of developing solutions in that area.”

The sixth centre to receive funding is SSPC, the pharmaceuticals research centre. “The centre looks at pharmaceutical manufacturing and how to grow consistent crystals to improve quality and dosage and so on,” Prof Ferguson notes. “It is looking at areas such as continuous manufacturing, as the batch method is quite inefficient. To give some idea of the importance of this centre and its work, it is estimated that 50 per cent of all medicines worldwide have some component made in Ireland. It is very important that Ireland remains at the forefront of research and science in that area.”

He believes the success of the research centres is in part due to the focus on basic as well as applied research. “The research across the centres spans a wide range of sectors at varying levels and stages – the holistic approach we are taking to our research is fundamental to its success. In only a very short period the SFI research centres have made incredible progress, in terms of increased academic and industrial collaboration, training PhD students for industry, winning competitive funding from the European Union, producing excellent scientific results and public engagement. We look forward to increasing our ability to positively impact both society and the economy through excellent scientific research.”