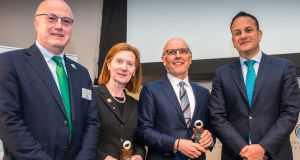 Margaret Murnane, Professor of Physics and Electrical and Computer Engineering at University of Colorado; and David McCourt, founder and CEO of Granahan McCourt Capital, are the latest recipients of the prestigious Science Foundation Ireland St Patrick’s Day Science Medal.

Now in its fifth year, the St Patrick’s Day Science Medal is awarded annually to a distinguished Irish scientist, engineer or technology leader living and working in the US.

The awards were presented last week by Taoiseach Leo Varadkar at a special ceremony at the United States Institute of Peace in Washington DC.

“I am delighted to present the SFI St Patrick’s Day Science Medal to these two inspiring leaders from industry and academia,” he said.

“Prof Margaret Murnane and David McCourt are both members of the Irish diaspora who are contributing significantly to research and innovation in their respective areas.”

Prof Margaret Murnane is a visionary in her field of laser science and one of the most acclaimed research-active physicists in the US. She is one of only two female physicists in history to be elected to the US National Academy of Sciences. Her many achievements include designing some of the fastest lasers in the world, with the ability to pulse in the range of the low trillionths of a second.

Today she continues to develop faster and more powerful laser systems. This work has enabled major advances by allowing researchers to image particles being studied in fields from physics and chemistry, to biology, medicine and technology.

Prof Murnane also created a table-top affordable X-ray laser allowing the wider research community to harness the potentials of X-rays in their work.

Prof Murnane, who was born and raised in County Limerick, first studied physics in University College Cork before completing her PhD at the University of California at Berkeley. She continues to play a significant role in research and the promotion of science in Ireland, in her keen and ongoing support for the Tyndall National Institute in Cork.

“This award is really a celebration of Irish science and I take it with a grain of salt,” she said with considerable modesty.

“I am an okay scientist who is very interested in solving other people’s problems. Science in the 21st century deals with very complex questions and a lot of people have to work together to make any advances. You have to collaborate and connect with a lot of other people. I did all my work with my husband Henry Kapteyn. We met in grad school just after I came to the US to do my doctorate. Science was not flourishing in Ireland at the time. That’s not true anymore and it’s wonderful for me to see how country has advanced since then.

“I am so honoured to receive this reward,” she added. “The education I received in Ireland is what made me interested in science. I had some brilliant teachers who were dedicated to igniting curiosity in the children they taught.”

A holder of Irish citizenship and with a home in County Clare, David McCourt has been very active in Ireland’s academic ecosystem in terms of funding, employment, and innovation for many years.

McCourt’s career has seen him develop a revolutionary technology that lowered the cost of building telecoms cable systems by 80 per cent, which went on to become the industry standard.

He is founder and chief executive of the network and telecommunications company Granahan McCourt Capital. In Ireland, Granahan McCourt has been highly active in expanding access to broadband through its part-owned company, enet, which operates next-generation, open-access telecoms infrastructure.A strong supporter of Irish research, McCourt has provided considerable support to the SFI Connect Research Centre.

He is also pioneering technology to develop “broadband in a box” technology which aims to bring internet connectivity to the most underserved technology areas in the world.

“The internet was meant to be a revolutionary technology that would connect us all and give us access to all the knowledge in the world as well as to great education and healthcare and so on,” he says.

“Yet, here we are and four billion people around the world do not yet have access to the internet. That’s why the National Broadband Plan in Ireland is such a great and important project.

“I have long been an advocate for Ireland as a place to do business,” he continues. “As an employer in Ireland, and with my own interest in R&D, I greatly value the culture of innovation and collaboration that exists between Ireland and the US. I believe that collaborative research with industry will continue to produce transformative advances that will enhance both our economies and societies.”

Irish science and research punches above its weight internationally, he adds.

“Any way you might look at the statistics, no matter how you slice and dice them, Ireland comes in between eighth and 15th in the world on various rankings. Ireland is a relatively small country and to come in top eight, nine, 10, 13 or 15 is really playing above its weight. The things that SFI stands for; transparency, an informed public, basic research, applied research, partnerships – SFI is focused on the right solution set for the problems we face.”