Mining and manipulating microbes for the good of our health 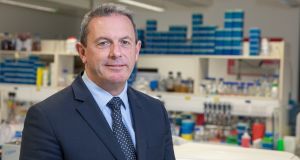 The trillions of cells which make up the human microbiome represent a treasure trove of new drugs, functional food ingredients and other health-giving potential and Ireland leads the way in research into this new frontier thanks to the work of the APC Microbiome Ireland SFI Research Centre based at University College Cork.

“We celebrated our 15 year anniversary in 2018,” says APC director Prof Paul Ross. “APC is the oldest microbiome research centre in the world, and we have seen a huge increase in interest in the area since then with research centres popping up all over the world, particularly in the US.”

And APC still leads the way. “We believe we are still the largest in the world with upwards of 300 researchers here,” says Ross. “It has been a pioneering research centre from the very beginning, and we are grateful for the support SFI has given us over the years.”

The centre’s genesis came about through collaborations between Teagasc and UCC across a range of areas including medicine, food, animal health and so on. Since then, APC has pursued three main lines of scientific pursuit: the development of new diagnostics or biomarkers of health or risk of disease based on analysis of the microbiome; the exploration of the mechanisms by which the microbiome may be favourably mobilised or manipulated; and mining it for new drugs and functional food ingredients.

The potential benefits of manipulation are wide ranging. “One example is on the agricultural side,” says Ross. “We are doing quite a lot of work on the reduction of methane production in the rumen of cows. This will reduce the greenhouse gas emissions from agriculture and has the potential to remove one of the barriers to the further expansion of dairy farming here. We are also involved in a collaboration with an Italian partner in relation to the Mediterranean diet which is rich in fruit and veg and is associated with short chain fatty acid production in the intestine. This is linked to cardio-vascular health improvements among other benefits.”

Another research theme is the extremes of life. “We are looking at how the microbiome develops early in life and how caesarean sections and antibiotics can impact it. In later life, the microbiome is in a dynamic state and its composition can be related to a deterioration in health status. We are looking at diet and other things to address that.”

The results of APC’s mining work have been little short of spectacular. “Antibiotic resistance is one of grand challenges facing humankind,” Ross points out. “A lot of the new antibiotics are just variants of existing ones. In the microbiome, bacteria are competing with each other and have developed a capability to compete by expressing small proteins to kill other bacteria.”

Researchers at APC have isolated these peptides which have proven to be as effective as antibiotics at killing bacteria and, in one significant breakthrough, provided a treatment for clostridium difficile infection.

“This is an organism that causes huge problems and has a very high mortality rate in elderly patients,” says Ross. “We found Thuricin CD, a potent antimicrobial which is active against it but doesn’t harm the microbiome. We are also exploring the potential of other natural gut organisms and proteins as a source of novel diagnostic and therapeutic tools for use in Inflammatory Bowel Disease.”

In the animal health arena, the centre has discovered a number of probiotics which can substitute for antibiotics.

Biomarker discovery remains high on the agenda. “We are doing a lot of work on cancer and trying to come up with microbiome-based diagnostics which could provide an early warning system. We are looking at the potential of the oral microbiome where we could take a swab from the mouth and the bacteria present could act as an indicator of risk for bowel cancer.”

The potential extends to the brain as well. “There is no doubt that the gut produces a lot of neuroactive compounds,” says Ross. “We are studying things like anxiety and depression and the potential to reduce the use of chemicals and pharmaceuticals in their treatment through the manipulation of the microbiome. What we are talking about is how microbiome solutions can have huge positive benefits for human health, animal health and the environment. This is the most exciting area of biology at the moment in my view.”