Is the indigenous sector being left behind in R&D activity?

Innovation 2020 aims to increase Ireland’s R&D investment to 2.5% of GNP 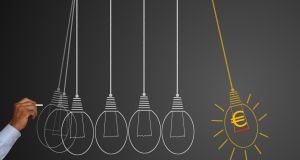 R&D is at the heart of the successful businesses that I see. Those that keep doing what they’ve always done get left behind,’ according to Derek Henry, partner and head of R&D tax services at BDO.

If the bulk of research and development activity here is carried out by multinationals, does that mean the indigenous sector is falling behind? Not necessarily.

The recent Research and Innovation Observatory Ireland Report highlighted a need to improve the take-up and performance of R&D by indigenous enterprises.

While Ireland performed relatively well, compared with the EU-28, in terms of innovation outputs, business expenditure on research and design (BERD) here is dominated by multinationals.

Falling numbers of R&D personnel and of PhD enrolments were also flagged up, as was the low level of collaboration between business and academia.

There was good news too, however, including the launch of Innovation 2020, the Government’s research, design and innovation strategy. It aims to increase Irish R&D investment, led by the private sector, to 2.5 per cent of GNP.

“Of course we’d love to see more Irish companies spending more on R&D,” says Gearoid Mooney, Enterprise Ireland (EI) divisional manager, research and innovation. “We know from experience that those that do, survive and thrive better over the long term.”

However, a higher spend by multinationals makes sense, he points out: “You’d expect large companies to be spending more because of the large size of their projects, but in terms of the number of projects, there are a lot more going on within the SME side.”

On average two-thirds of R&D spend is accounted for by the multinational sector and one-third by the indigenous. The last time BERD was measured here, in 2013, that one-third equated to €700 million a year.

“We can tell from the amount of money spent by EI clients that spend on R&D has gone up by €100 million a year since then. It’s still not stellar but it’s a reasonably good rise. R&D spend is trickling up,” says Mooney.

For start-ups EI’s R&D support comes in terms of equity investment. For more mature companies, it’s in the form of a grant-based programme. “The worry for us over the past few years is that the use of this scheme was going down, so we put in place a process involving interviews with companies and focus groups to help us find out why. One of the things we found was that people found it overly rigid. If they applied for a grant on the basis of one project, and that project changed – and given the nature of innovation that’s always a likelihood – they were finding that change harder to deal with than we realised. Also, the breadth of the R&D scheme is being extended so that it will cover much more in future.”

R&D intensity – R&D expenditure as a percentage of GDP – in Ireland is 1.54 per cent. The Government is committed to getting that to 3 per cent under the Lisbon Treaty, but, as GNP grows, that’s a harder target to achieve.

The headline fact that 65 per cent of R&D spend here is carried out by foreign- owned companies and just 35 per cent by the indigenous sector – which make up 90 per cent of businesses here – is deceiving, agrees Derek Henry, partner and head of R&D tax services at BDO.

“The quantum of spend is one thing. But in terms of people on the ground the picture is a lot more positive for the indigenous sector than it looks.”

R&D activity among multinationals brings spillover benefits too, he points out, both in terms of outsourced R&D, supplier innovations and commercial spin-outs.

But where the indigenous sector is “missing a trick” is in failing to avail of the R&D tax credit, he says. It provides for 25 per cent tax relief on qualifying R&D cost, meaning that if you spend €100,000 on R&D, you get €25,000 back. And that’s on top of the 12.5 per cent corporate tax rate. And if you don’t have a liability, up to 25 per cent can be refunded in cash – making it of particular interest to small companies and start-ups.

“Some miss out by not realising the R&D tax credit is quite broad in its range. You could be a bread maker trying to reduce sugar or calorie count, and all your processes will have to be adapted without affecting the product – that’s innovation,” says Henry.

“Equally, everyone is looking at new markets, for example, and very often innovation can be the key that helps unlock them. It’s for that reason that R&D is at the heart of the successful businesses that I see. Those that keep doing what they’ve always done get left behind.”

More could be done to help shore up the gaps that have been identified in Ireland’s R&D landscape.

“At the moment, the cap on R&D relief for subcontracting to universities sits at 5 per cent, compared to 15 per cent for third parties subcontracted to carry out R&D on a company’s behalf. A change to equalise this cap would avoid apparent discrimination and also help to drive the Government’s commitment to create greater linkages between businesses and third-level institutions,” says Ian Collins, partner and head of R&D for EY Ireland.

“For SMEs, any delay in the issuing of R&D refunds by the Revenue can have a detrimental impact on their ability to trade, therefore it would be a welcome development for SMEs to be given the opportunity to avail of their cash refunds immediately, as opposed to the current regime which sees this take place over a three-year period.”

There is still some work to be done in terms of promotion too. As part of his work surveying the indigenous R&D landscape, EI’s Gearoid Mooney called a business owner who had filled out a survey saying his business had spent zero on R&D in the past year, even though Mooney knew that not to be the case. When Mooney called the owner to ask why, he was told, “Oh we don’t do R&D here, we just do new product development.”

Innovation 2020 aims to increase total investment in R&D in Ireland, led by the private sector, to 2.5 per cent of GNP. On current official projections, this would mean that over €5 billion will be invested per year in R&D by the private and public sectors by 2020 – almost doubling 2014 levels.

Other targets include an increase in the number of research personnel in enterprise by 60 per cent, to 40,000; an increase in research masters and PhD enrolments by 30 per cent to 2,250, and a doubling of private investment of R&D performed in the public research system.

The strategy also hopes to see a 40 per cent increase in the share of PhD researchers transferring from Science Foundation Ireland research teams to industry.

The country’s network of research centres will be further developed, specifically to address the needs of enterprise, and benchmarking will take place to assess Ireland’s performance relative to other countries.