Inspiring the next generation of scientists and innovators

Science Foundation Ireland’s Tech Week is aimed at students, parents and the public 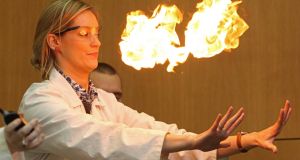 Tech Week Ireland’s nationwide festival of technology aimed at students, parents and the public kicks off on Saturday, April 22nd next.

Tech Week is part of Science Foundation Ireland’s programme of public engagement on science and is made up of a range of classroom and community activities taking place in libraries, schools, community centres and other locations across the country.

“These activities give students a chance to develop their interest in technology subjects, examine potential career prospects, learn new skills, be creative and, most importantly, have a lot of fun,” according to Science Foundation Ireland (SFI) director of strategy and communications Dr Ruth Freeman.

This is just one element of SFI’s overall science communications programme, which also involves the €2.8 million Discover programme, Smart Futures, Science Week, Engineers Week, as well as supported initiatives such as iWish and Coderdojo.

Communicating science to the wider public is important at several levels, according to SFI director general Prof Mark Ferguson. “Science and scientific research is incredibly interesting and it’s good fun as well,” he says. “There is a natural human curiosity in relation to how the world and everything in it works. We want to engage with people in educational and enjoyable ways to help them understand and appreciate the benefits of scientific research and how it can help solve the great challenges facing mankind, such as climate change, how to feed a growing global population, data privacy, and the prospect of being replaced by robots.”

This is both for the good of society and science. “The only way for people to have a real influence over what’s happening is to be properly informed about what’s going on,” Ferguson explains. “If we want to have a rational debate around issues like a carbon-free future, people need to have the information.”

The other key piece is around engaging children. “There are many, many very satisfying careers open to people with a science qualification,” he adds. “Having the skills to be able to argue logically and to weigh up evidence are skills required right across the board and not just for scientists. All sorts of jobs, including journalism, require them.”

Reaching out to children means reaching out to families as well. “We want to help children grow up in an atmosphere where family members have the confidence to discuss science issues at the dining room table. A good example of that is the Big Week on the Farm series that we are co-operating on with RTÉ. The science and technology behind everything from drones to milking is discussed in a fun and engaging way.”

SFI has just announced 44 new projects, which are being supported through the Discover programme. More than 200 education and public engagement projects have been supported under the programme since 2013. The programme has developed substantially over the years and grown to 120 applications per annum.

This year’s awards are estimated to reach over two million people, according to Dr Freeman. “The projects are delivered by a vibrant and committed group of practitioners,” she says. “The projects are selected following a competitive, internationally peer-reviewed process. The aim is to improve people’s science capital.”

She explains that science capital is a measure of the amount of exposure people have to science in their lives. “The concept originally came from the Aspire research project in the UK. If you don’t know anyone who does anything to do with science in their jobs or their daily lives, and if your family members don’t engage with science either, you are going to have a low science capital score. At SFI we very much believe in the democratisation of science. We want every citizen in Ireland to be able to engage properly in the conversation around science and technology.”

Along with the funding of education and public engagement, an important part of Science Foundation Ireland’s mandate is to grow the Stem talent pipeline. “This is based on nationally-identified skills gaps and our desire to grow innovative companies in Ireland, to attract foreign direct investment and create a culture of innovation,” says Mark Ferguson. “Through our own Smart Futures programme, and by supporting projects such as iWish and Coderdojo, we are creating access to role models in Stem and increasing awareness about career opportunities.

“Several of the projects funded under the SFI Discover programme are helping address the low numbers of females participating in the physical sciences and higher level mathematics. By actively supporting these programmes, especially those that reach out to counties with low levels of participation, we can inspire the next generation of Stem graduates and innovators, challenge stereotypes, create jobs and improve public perceptions among a wider diversity of people,” he concludes.