Dietary whey proteins could be solution in war on obesity 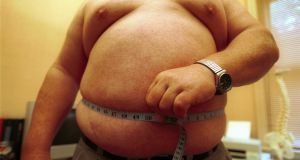 Obesity increases the risk of development of several clinical conditions such as diabetes and cancer. Photograph: Pozarik/Getty Images

Research into the impact of whey on people’s diets could play a major role in the battle against the global obesity epidemic. The research team, led by Kanishka Nilaweera and Paul Cotter of Teagasc, has examined how dietary whey proteins can reduce body weight gain and the team’s work could lead to the development of new food products that can contribute to preventing or even curing the development of obesity.

The scale of the problem is vast. The prevalence of obesity worldwide has doubled since 1980, according to the World Health Organisation. In this country, Healthy Ireland 2015 revealed that 60 per cent of the population aged 15 years and over are now either overweight or obese. Obesity increases the risk of development of several clinical conditions such as diabetes and cancer and the development of suitable interventions to cure or prevent it is seen as a key priority for health authorities around the world.

The Teagasc research, which also received funding from Science Foundation Ireland, focused on the well-established role of the intestine in body-weight regulation. This played to the strengths of Nilaweera and Cotter. “I did my PhD on obesity at the University of Aberdeen, ” says Nilaweera. “I looked at how the body responds to what we eat and I started looking at the effects of whey protein when I joined Teagasc in 2009.”

Cotter specialised in the study of the microbiota at UCD before joining Teagasc, also in 2009. He remains a principal investigator at the UCD-based APC Microbiome Institute which specialises in research into the gastrointestinal bacterial community. Each of these institutions, the University of Aberdeen, UCC, and the APC Microbiome Institute, has been involved with Teagasc in the research.

The intestine plays a specific role in the production of satiety hormones – the chemicals which tell us whether we are full or hungry, as well as in nutrient transportation. Without the microbes that live naturally in the gut many of the nutrients we consume would simply pas through the body without being absorbed. This has an important influence on body weight regulation.

Indeed, research using germ-free mice, mice with no microbes in their gut, has shown that they put on less weight even when consuming more food than conventional raised mice with normal amounts of gut microbes.

The Teagasc research looked at how changes to one component – diet – could influence the outcome of the interaction between nutrients, intestine and gut microbiota in terms of body-weight regulation.

“Whey products have been used by athletes and others for a long time,” says Nilaweera. “I started working with Paul in 2012 on how whey proteins affect body composition.”

Changing consumer patters also had an influence. “Protein products were mainly used in sport but have been increasingly moving into the supermarkets as part of consumer weight-management products,” says Cotter. “Many of them used whey and we decided to look at that. Whey is made up of many different proteins and we wanted to look at ones which work best.”

Mice were fed a diet with whey protein isolate (WPI) with either high or low sucrose for 17 weeks while another group of mice, the control group, received the same diets but with casein instead of WPI.

Overall, the results suggested that WPI affects intestinal mechanisms controlling nutrient absorption, nutrient transporters and the gut microbiota, and that by modifying the sucrose content in the WPI diet, there is a further independent effect on fat mass.

Crucially, the results also suggest that taking whey protein as part of a normal diet might help people gain less weight than they would otherwise and help in the battle against obesity.

The effect can be amplified by taking out the sucrose, as Cotter explains. “Manufacturers use sugar in products to improve their sensory profile. Artificial sweeteners may offer a solution but there is research to indicate these may be unhealthy in the long term. However, stevia shows promise as a sweetener and could be a good alternative.”

For the future, Nilaweera and Cotter would like to hear from manufacturers interested in developing products based on their research. “We try to bring our research results to the attention of industry,” says Nilaweera. “We have strong links to all the main dairy processors through Teagasc and we hope that one of them will take an interest in this. We are interested in hearing from food companies who might be interested in looking at the potential commercial applications of our research.”