While the sector has seen huge growth, Ireland must work hard to keep the investment coming, say industry leaders 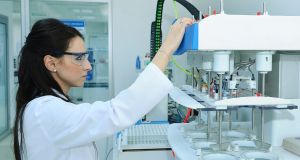 Government investment in infrastructure, transport routes and education and skills are crucial in attracting investment by pharmaceutical companies. Photograph: Getty

The pharmaceutical industry is worth more than €30 billion in exports, and given anticipated expansion and replacement demand, it is estimated that 8,400 potential job openings will arise within the biopharma industry in Ireland over the next five years

Speaking at the 2016 International Biopharma Ambition Convention, Minister for Health Simon Harris said the industry is committed to making Ireland a real centre of excellence for biopharma, continuing its pursuit of new innovations that can transform the lives of patients in Ireland and elsewhere.

With this in mind, we look at what is driving that boom and what the next generation of biopharma in Ireland might look like.

“Our country is considered to have an open and transparent economy that lends itself well to do business successfully and is an excellent gateway to European markets; moreover, its continued economic recovery and resilience has really encouraged the creation of this vibrant pharmaceutical environment. The pharmaceutical industry in Ireland has also had a strong record of quality and regulatory excellence.

“We believe the boom is mainly driven by a mix of Government support for pro-enterprise policies coupled with the fact that it’s a country filled with exciting opportunities for talented people. For our part, we in MSD have a strong legacy in Ireland that actually stretches back over the last 50 years.

“Many of our leading products are globally manufactured or produced here at our sites in Carlow, Cork and Tipperary; in fact, over 60 per cent of MSD’s global top 20 products are manufactured here. So Ireland plays a really key role in MSD’s worldwide operations.”

Barry Heavey, head of life sciences at IDA says a burst in growth of drug approvals, alongside a lack of suitable manufacturing plants worldwide has given Ireland an edge.

“Ireland has been in the sweet spot in being able to make up that delta between the market demand and supply of manufacturing capacity.

“The benefit of a lot of the research that’s been happening in the last 20 years around the human genome is coming to fruition. Now companies are better able to design drugs, they understand disease better and they have a better take on the likely success of a drug.

“Companies are designing more complex, large molecules drugs now, which are hard to manufacture. We’re seeing those getting approved at a higher rate; seven of the top 10 blockbusters are large molecules and there is a global shortage of manufacturing capacity for those. You can’t manufacture them in older facilities so companies have to build new facilities and hire new people to make these drugs.” He says Ireland is reaping the benefits of this.

Laura Scott, litigation partner and head of healthcare at law firm William Fry says the boom is being driven primarily by industry in Ireland but also by governmental strategies and policies.

“The industry itself has been flexible and always with a keen eye to making sure they are getting the investment that comes from their parent companies around the globe so that Ireland is the site to win new investment.”

While we are already getting a lot of foreign direct investment, Heavey says we can never become complacent and every investment is hard won. Fears of a reduction in FDI due to speculated changes in America’s own corporate tax rate following the election of Donald Trump to the White House are being played down by many commentators, who say that Ireland has far more to offer than its corporate tax rate, namely a skilled workforce.

So what can Ireland do to maintain the attraction and keep investment coming?

“We established the National Institute for Bioprosessing Research and Training (NIBRT) so graduates can go there and get skilled in the art of working on the complex drugs and that has been a really strong boon to us. With these types of drugs, they need very sophisticated devices to take them or inject them so there is big opportunity for us to leverage our medical device expertise and win more biotech investment. We’re currently looking to develop a similar initiative to NIBRT that’s focused on medical device manufacturing and we’ve a proposal in with government to get that funded,” Heavey says.

Brennan says sustained Government investment in infrastructure, transport routes and education and skills are crucial, as well as support from State bodies like IDA Ireland. Scott says having the right people who can do the job well is not to be underestimated either.

She says our general corporate tax rate is attractive to foreign companies as well as lots of other initiatives including the R&D tax credit and the Knowledge Development Box. Bodies such as Science Foundation Ireland and NIBRT, which are industry/academic collaboration centres, have been hugely successful in creating the right environment too.

Brennan agrees: “Ireland has a significant track record of clinical and academic research excellence and the Government has committed €8 billion to research funding to further bolster Ireland’s reputation as a growing hub for research and development.

“Indeed, the Government’s R&D initiatives have encouraged MSD to position its sites in Ireland as development centres for our new product portfolio, and we are developing many of our pipeline products here also, bringing with it considerable investment.

“It will be important that ‘Ireland Inc’ continues to nurture and foster the pharmaceutical sector. Focusing on Ireland’s competitiveness is even more important now in the wake of the Brexit vote, as other countries compete for investment in this sector.

“Education also needs to evolve to keep pace with the technological advancements of our time. The syllabus must match the needs of employers as well as the realities of our digital era,” he adds.

In terms of what’s next for the industry, Scott says: “There’s already a clear growth in biopharma manufacturing so the next generation is in the service areas around that. We have seen a convergence between the biopharma areas and technology.

“Companies like Samsung are getting into biopharmaceuticals because there’s a lot of technology that is very relevant to the manufacturing process. We’re well-positioned as we have a good ICT sector and pharma sector and if we can marry the two that might be an area of growth. There’s also areas of growth in relation to clinical trial activities and I think bodies like the IDA are careful and focused on making sure there’s a healthy diversified mix of growth and it’s not just focused on manufacturing.”