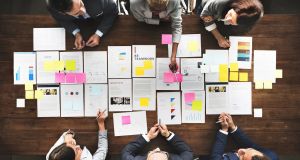 A lot of work which might be seen as routine or an ongoing part of running a business or organisation can also be helped by good project management. Photograph: iStock

Project management is, by definition, temporary in nature in that it has a beginning and an end and an outcome. But that doesn’t mean it needs to be a new road or bridge or construction project. “A project can involve the creation of a new organisation or a new mobile phone service, for example,” says PMI Ireland Chapter president Niall Murphy.

In addition, a lot of work which might be seen as routine or an ongoing part of running a business or organisation can also be helped by good project management. “A lot of work is being projectised,” he says. “That’s the way business is being done now. We see it a lot in financial services and IT. Things like GDPR or the Payment Services Directive or Brexit can result in new organisations being set up or splits in existing organisations and the best way to approach those things is through projects.”

PMI marketing lead and PwC management consultant Peter Glynne agrees. “Over the past few years, change has become a constant in every organisation and the pace of that change is increasing,” he says. “Ireland has a really good reputation on the global stage but the country has major challenges to face, including Brexit, the housing crisis, and threats to FDI from international events. Project management has a role to play in meeting those challenges. Best practice in project management guarantees a level of success, reduces complexity, takes out risk, and improves outcomes.”

Derek Tierney of the Department of Transport, Tourism and Sport has led an initiative to bring greater project-management competency to the civil service to help it meet the not-inconsiderable challenges which lie ahead both for the organisation and the country.

“In the 1990s and 2000s, we used agencification to deliver new services,” Tierney points out. By this, he means there was a tendency on the part of government to create new agencies to deal with new services as they arose. “But in the consolidation years we didn’t have that luxury.”

That meant that not only did existing government departments have to find the capacity within shrinking resources to take on new mandates but, in many cases, they also had to be able to take on services formally delivered by some of those specially created agencies.

He puts the importance of success in context. “There isn’t a person in our country who is not dependent in some way on the services designed, developed or delivered by the civil service,” he says. “Whether it is in education or travel, security or defence, enterprise or welfare, taxation or agriculture, employment rights or health, arts or sport, housing or transport, every day, all of the people who live in Ireland and many of our citizens abroad benefit from the services that we design, develop or deliver on their behalf.”

The scale is vast. The civil service comprises some 37,000 staff, manages more than €60 billion worth of current and capital expenditure and oversees the activities of organisations that employ a further 300,000 people.

Acknowledging this new reality, the Civil Service Renewal Plan published in 2014 set the improvement of project management capacity as a key action. This in turn led to the initiation of a programme led by an established Project Management Leaders and Advisory Service (PMLAS) comprising senior managers from the Department of Finance, Public Expenditure and Reform, Transport, Tourism and Sport, Social Protection as well as the Revenue Commissioners and the Office of Public Works.

PMLAS has since established a Project Managers’ Network (PMN) of some 200 participants, published a Project Management Handbook for the civil service, and set up a web portal to host the handbook and supporting toolkit and facilitate the organisation and administration of network events and host resources for network members.

“We have also developed a practical two-day foundation course in project management and that is scheduled to be rolled out in the coming months,” Tierney says. “Our next challenge is to think beyond that and take it to the next level and help increase the capacity for change and innovation within the civil service.”

He concludes with the example of a company deciding it needs to enter the German market for the first time in anticipation of Brexit. “That’s a project,” he says. “If you want to be there by January 1st, 2019, you need to be able to drive all the parts of the organisation that need to be involved in the effort. You may also need external suppliers and partners such as lawyers and accountancy firms. That’s part and parcel of modern business activity.”