World’s largest agricultural machinery exhibition a ‘Mecca for the sector’ 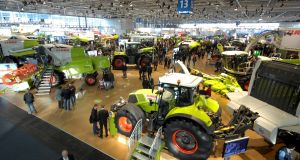 Enterprise Ireland is leading a group of 18 companies to fly the flag for the Irish agri-tech sector this week at Agritechnica 2017 in Hanover, Germany. Agritechnica is the world’s largest agricultural machinery exhibition and a “kind of Mecca for the sector”, according to Enterprise Ireland senior regional development executive James Maloney.

“It’s a massive exhibition with 27 halls covering 394,000sq metres of space,” he says. “There are 2,900 exhibitors at this year’s fair and the organisers expect 450,000 visitors. It’s particularly popular with the Irish agricultural community; there were 6,500 Irish visitors last year.”

“Irish manufacturers have an excellent reputation for building tough rugged machinery that can handle difficult conditions”, says Maloney. “And you don’t get conditions much tougher than wet fields in Claremorris. We had a visit from New Zealand buyers to Ireland last week and secured a number of deals to supply product to New Zealand in the coming months. It’s good that the Irish industry is servicing new markets outside of UK in the context of Brexit. We are looking to increase exports to Germany from Irish companies as well. We want to grow new markets for this sector and the presence at Agritechnica will help.”

He believes the agri-tech sector will play a significant role in meeting the Food Harvest 2020 objective of creating 60,000 new jobs and €5 billion in additional exports by 2020. “We want to promote Ireland as an international agri-tech and innovation hub,” he says. “Our grass-based production system gives us an edge in that regard and we have products that can compete on the international stage.”

Many of these products were on show at the innovation area hosted by Enterprise Ireland at the National Ploughing Championships in September. “The innovation arena featured both start-ups and established companies,” says Maloney. “A big driver for innovation in agri-tech is labour efficiency. It’s hard to get farm labour at the moment and agri-tech is solving that problem though the application of robotics and automation. It is also solving problems in areas like food security and environmental protection. That’s the space we are in.”

One of the participating companies was Moocall. “They have a slogan, ‘The bull knows best’,” Maloney says. “They have a collar worn by the bull that detects which cows are in heat and monitor the bull’s activity. They also have a device which alerts a farmer when a cow is close to calving.”

Another company, Dairymaster, has developed a smartphone app that gives the farm access to their milk tank enabling them to control temperature and other factors.

Carlow-based Keenan Systems demonstrated its InTouch service technology at the event. “The InTouch service uses telematics to connect the mixer wagons in the field with a team of Keenan experts in its data centre in Carlow. They can adjust the mix remotely to optimise the feed in order improve yields in animal growth or milk production. The company was acquired by Alltech last year and that is very good news for the future as the Alltech CEO is very supportive of collaboration with Irish agri-tech sector.”

These firms are all successful on the international stage but there is still some way to go before Ireland becomes a recognised leader in the area. “Irish agri-tech companies are good but we’ve still got a lot to learn,” says Maloney. “John Deere has invested $1.5 billion in agri-tech development, for example. We are seeing rapid developments in smart farming and artificial intelligence and we are going to see a lot more of that. There will be a shift to autonomous machines where you might have two smaller machines with one of the working autonomously instead of one large one. There will be a reduction in diesel usage with a move towards electric power. We are also going to see methane-powered engines using biogas. John Deere is looking at electric vehicles at the moment but the limiting at the moment is battery storage capacity.”

Another limiting factor is the source for biofuels. “Are we going to use food crops for biofuels?” Maloney asks. “Can we produce enough food to feed ourselves when we have a planet of 9 billion people in 2050 if we are using some of it to manufacture biofuels? From Enterprise Ireland’s point of view this is very exciting. It fits our overall mandate of helping create jobs in the regions and it’s very important for us. Most of the agri-tech industry is based outside Dublin. This will generate manufacturing activity in the regions creating spin-off jobs in services.”

Enterprise Ireland is also working with Teagasc and others to grow the agri-tech sector. “There is some very exciting stuff happening in the third-level sector,” says Maloney. “Enterprise Ireland supports that with Innovation Vouchers and feasibility study grants. One pin-out company has created a kind of Tinder for cows which matches their traits with the bulls’ to get the best progeny. Equilume has taken a technology invented for horses and adapted it for cattle and it can boost milk yields by up to 9 per cent per annum. What Enterprise Ireland can do is take a company from start-up stage and help it grow to where it becomes an established player.”