Ireland is getting the med-tech investment. What it needs are graduates to fill the jobs 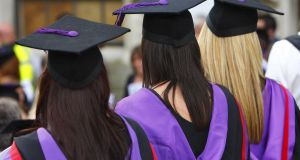 ‘There is an ever-increasing need for ever better graduates’: Austerity helped cause the dry up of PhD numbers, which Science Foundation is now trying to reverse. Photograph: Chris Ison/PA wire

Highly qualified graduates, and plenty of them, are central to sustaining Ireland’s life sciences success. But how to get them?

“There is an ever-increasing need for ever better graduates,” says Mark Ferguson, director general of Science Foundation Ireland.

The past few years have seen an unfortunate decline in PhD numbers, a fact Ferguson attributes to austerity.

“Part of our national Science Strategy 2020 is to bring this back up and see a small increase,” he says. “It’s not a problem now, but it needs to be fixed before it becomes one.”

There is another issue, which predates the recession: the so- called “leaky pipeline”, which sees the sciences lose women at a greater rate than men. Life sciences has better gender balance than areas such as physics and engineering. Still, even here, the higher up the ranks you go, the fewer women there are, particularly in academia.

“It’s a problem for all countries,” Ferguson says. “We have a 50-50 male-to-female ratio right up to PhD level. But after that, as you get to the principal investigator stage, it drops precipitously to 20-30 per cent women.

“It’s a problem, particularly as scientific evidence shows that with diverse leadership, in either companies or universities, you get better results.”

For industry to compete for life sciences talent, companies have to become employers of choice. “Identifying and attracting the best talent available can be challenging,” acknowledges Mairead Dunne, site director of AbbVie Cork.

“The high-tech nature of AbbVie’s manufacturing business in Ireland is attractive to the highly educated and skilled workforce in the area,” Dunne says. “We also realise that we have a role and responsibility in cultivating future talent, particularly in the area of Stem” – science, technology, engineering and maths.

“The work that Science Foundation Ireland has undertaken in the area of Stem, and developing the future pipeline of talent, is very reassuring,” she says. “However, there is an ongoing requirement to encourage an engagement with science from an early age.”

Dunne says AbbVie supports this through a partnership with Young Social Innovators as well as its own science programme with primary schools.”

That kind of long-term thinking, she says, will enable Abbvie continue to attract “Ireland’s brightest and best”.

Also important is ensuring that all graduates have not just science smarts but industry skills too.

SSPC has introduced structured PhD programmes that ensure students have industry knowledge as well as requisite scientific skills, from project management to intellectual property and regulatory environment. All of this enables them “hit the ground quicker”, O’Halloran says.

In the pursuit of talent, being recognised for research excellence is invaluable. For example, Science Foundation Ireland funded the APC Microbiome Institute at UCC, which researches bugs and bacteria in the human body. It has more than 250 researchers on staff, ranging from microbiologists to psychiatrists.

“We’re well-known internationally and we attract good people,” says Catherine Buckley, its communication and outreach manager. “We work with both food and pharma companies, too, which makes us unusual.”

Galway’s Cúram is another centre funded by Science Foundation Ireland, this one for research in medical devices. Part of Cúram’s role is to translate the research being done on a host of illnesses, from Parkinson’s to diabetes, “from bench to clinic”, says director Abhay Pandit.

“Galway is a global hub for med tech R&D, and Cúram strengthens that,” he says. “It gives industry a competitive edge to be involved in the research side of things.

“What we are doing here is training the next generation of researchers, exposing them to all different types of research, developing their skills with a cross-disciplinary, multidisciplinary focus. That is quite unusual worldwide.”