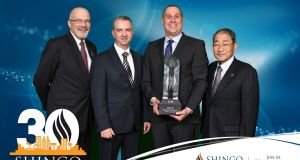 The prize is named after Dr Shigeo Shingo, the pioneering Japanese industrial engineer who advised Toyota on its ground-breaking manufacturing systems, and recognises organisations that demonstrate an exceptional culture that fosters continuous improvement.

The Shingo prize is an annual award given to organisations worldwide by the Shingo Institute, which is part of the Jon M Huntsman School of Business at Utah State in Logan, Utah.

The award was presented to representatives of the Sligo site recently at a ceremony during a conference in Orlando, Florida. AbbVie is one of only four companies in the world to receive the accolade in 2018.

One of five AbbVie sites in Ireland, Ballytivnan currently produces drug delivery devices, including an auto injector pen which is used by patients around the world who have been prescribed AbbVie treatments for a range of immune-related illnesses, including rheumatoid arthritis and Crohn’s disease. The site also supports the manufacture of a combination product that is used to administer a treatment for patients with advanced Parkinson’s disease.

AbbVie is a research-driven biopharma company developing innovative advanced therapies for some of the world’s most complex and critical conditions across four primary therapeutic areas: immunology, oncology, virology and neuroscience. The company employs more than 600 people in Ireland.

“Receipt of the Shingo prize is a worldwide-recognised symbol of an organisation’s successful establishment of a culture anchored on principles of enterprise excellence, principles such as respect for every individual, leading with humility, quality at the source, the quest for perfection and creating value for the customer,” said Shingo Institute executive director Ken Snyder. “Ultimately, recipients are in a class of the best organisations in the world, regardless of industry or country.”

“We are delighted to have been awarded the Shingo prize,” said Joe Kumor, site director at AbbVie Ballytivnan. “Our people are our greatest asset and we are very proud of our culture. This award is the result of the dedication and hard work of all our employees and the pride they take in ensuring that the products we manufacture here make a remarkable impact on the lives of our patients around the world.”

Culture was central to the site’s success in winning the award, according to Niall Kerlin, operations manager at Ballytivnan. “AbbVie’s Sligo employees were incredibly proud of the recognition from the Shingo Institute. Using the Shingo Model, we have built a culture of operational excellence by ensuring that our people, systems and tools are all aligned to our company vision and strategies. The focus on our culture and behaviours has resulted in an engaged and dedicated workforce that is continually improving how we run our business.”

The award follows closely on the announcement of a major expansion for the Ballytivnan site to support the growth of AbbVie’s oncology pipeline. The $139 million investment in new sterile manufacturing technology will help deliver promising treatments for cancers with significant unmet medical needs. The expansion will create about 100 new jobs over the next three years in a variety of technical and manufacturing positions.

“This investment demonstrates AbbVie’s commitment to Ireland, and the laser focus of our team in Sligo on making a remarkable impact on patients’ lives,” said Joseph Kumor. “We are proud to be recognised for our high performance over the years and are excited to have been chosen to help accelerate AbbVie’s oncology pipeline.”

IDA Ireland chief executive Martin Shanahan said: “This expansion by AbbVie is great news. It builds on their more than 70-year commitment to Ireland and is a tremendous vote of confidence in the capability of the workforce in Sligo and the wider northwest region. Securing regional investments is a key part of IDA’s strategy.”