Irish invention is giving people in Malawi the power they need 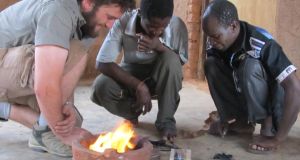 A simple, locally made device added to a clay stove can use the heat from cooking to make electricity to charge mobile phones, lights and radios

Dublin engineers working with rural communities in Malawi have come up with an effective joint solution to two problems faced by developing countries.

Clean cooking has become a priority for Irish Aid and other organisations working to tackle the huge health and environmental problems from inefficient solid-fuel cooking methods. Now a simple, locally made device added onto a clay cooking stove can use the heat from everyday cooking to make electricity to charge mobile phones, lights and radios.

Malawi is one of the the world’s least developed countries. More than 85 per cent of Malawian people live in rural areas, and fewer than one out of every 100 rural people has access to grid electricity.

“At the very best by 2025, only 20 per cent of the population will have grid electricity, so there will still be a huge need to need to find energy solutions for the majority of Malawians,” said Aidan Fitzpatrick, head of development at Irish Aid in Malawi.

The vast majority of people burn solid fuels in their homes for cooking, heating and lighting. Traditional stoves are wildly inefficient, putting only a fraction of the energy from burning fuel to use.

Women in Malawi spend hours each day searching for firewood while household air pollution worldwide leads to more than four million deaths a year, according to the World Health Organisation.

Aside from human energy and lost hours, there are immense environmental consequences. “Malawi is currently 95 per cent deforested, with eight million metric tonnes of wood unreplaced per year,” Fitzpatrick says.

“We wondered why so many energy projects fail to take off,” says Séamus O’Shaughnessy, a post-doctoral engineer on the team. “And we saw that the main reasons that possible energy solutions weren’t adopted were that the designs were alien to most people, with local people not given opportunities to dictate their needs. There’s also very little commercial potential in complex or expensive designs, meaning they couldn’t be made into viable local businesses and therefore be sustainable.”

Uniquely, the group then focused on developing a generator which could create and sustain community jobs.

“It has to be something people can make and sell in Malawi and that others will want to buy,” says Prof Robinson.

The group partnered with nongovernmental organisation Concern Universal and Irish Aid in Malawi to design an electricity generator to fit onto a clay stove already in use as part of the government’s plan to roll out two million clean stoves by 2020. The clay stove design used in the government programme reduces the need for fuel by more than 40 per cent, according to a 2012 report from Concern Universal.

“We saw that people had already figured out pretty innovative energy solutions like using a roll of dead batteries to power a tiny LED light. Rather than just expecting communities to adapt, we trialled our designs by asking people to use this instead of their normal stove. Data-logging devices allowed us to track use and improve the design,” says O’Shaughnessy.

Building a simpler model proved even more difficult. “It’s actually much easier to make a complex device but to make a simple one we had to do a huge amount of high-tech research,” says Prof Robinson.

“We needed to design something to withstand an extreme environment, requiring no training or maintenance so people can plug in their phone or light while they’re cooking and get on with their lives without having to go search for firewood every day. On top of that, it had to be cheaply produced in Malawi with locally available materials.”

The researchers were surprised that households using the stove generators were making much more electricity than they were using.

“So now we saw the potential for this as a cottage industry with one family charging their neighbours’ phones for a fee and saving them the long walk to the charging station. We improved the design and when we went back to the villages, we found that people had already realised this and were making money from their stove energy,” he says.

The stove generators will in time be made locally for €20, allowing families to buy them using microfinance options.

Blessings Kambombo, UCD graduate and project manager with Concern Universal, has worked on the project since 2011. Speaking from Dedza in central Malawi, he says: “We targeted the poorest people living in rural areas, who have no hope of being connected to the electric grid.

“They have to walk for miles to spend up to a dollar each time they need to charge their phone. The stove generator can open up opportunities for them to use phones at an affordable cost to do their banking or get seeds and fertiliser.

“Rechargeable lighting is crucial for schoolchildren to be able to do their work. Some communities now also charge small radios; people are really excited, this is so new to them.

He emphasises the importance of the business model. “Once it’s rolled out, it will make a huge difference to rural communities not only by improving their quality of life but providing business opportunities and therefore choices.”

Hearns says: “There is strong commitment to this at a government level, although still at an early stage. I believe that if we can make these affordable, the stove generator offers real potential to contribute to addressing energy poverty, a huge issue here in Malawi, across Africa and other continents.

“It also demonstrates how Irish universities can be effective in addressing development challenges.”