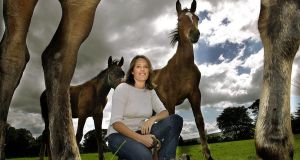 Horse geneticist Emmeline Hill said if inbreeding is unchecked, it would continue to increase, given the high demand in the business for particular bloodlines of successful sires. Photograph: Brenda Fitzsimons.

A significant rise in inbreeding in the thoroughbred horse sector poses threats for Ireland’s valuable breeding business, according to a new study.

Irish horses made €338 million in sales at public auctions in 2016, according to a Deloitte report on the sector. That makes the country the second-biggest player in what was a €1.89 billion business that year.

Deloitte estimates that a further €100 million in private sales took place away from the auction ring, with the industry earning a further €130 million in stallion breeding fees.

On a per capita basis, the 2017 Deloitte report found that breeding and racing activities in Ireland were the most prominent and important of any country.

She said it would continue to increase, if unchecked, given the high demand in the business for particular bloodlines of successful sires.

The study, conducted by a team at UCD, established that there had been a significant rise in inbreeding on the global population of thoroughbred horses over the past 45 years. “The problem with inbreeding is that it can compromise overall population fertility and health,” Prof Hill said. “This is a highly significant issue, where inbreeding is accumulating in the [horse] population that must be addressed at an industry-wide level.”

The UCD research was run with Plusvital, an equine nutrition and science business in which Prof Hill is chief science officer.

She is the founder of Equinome, which discovered the “speed” gene that determines which racing distances best suit a particular horse.

The business was subsequently acquired by Plusvital, a business backed by the family of Denis O’Brien. Aside from her role with Plusvital, Prof Hill remains professor in equine genomics at UCD.

The UCD/Plusvital study examined genetic diversity among 10,000 horses, which is reported to be the largest group yet examined.

In a sector that Deloitte reckons employs almost 29,000 people throughout the economy – about 9,000 of them in core breeding and racing activities – any threat to horse health and performance is a significant concern.

More than one in five of the top-rated flat horses in training in 2016 were Irish bred and the Deloitte report says the Irish economy benefitted in 2016 by a total industry spend of €1.84 billion, with €1.05 billion of that in core breeding and racing activities.

Plusvital is one of the leaders in DNA testing sector. Apart from the speed gene, Prof Hill has also identified what is called a motivation gene and developed tests for each. She said recently that she considered the broader thoroughbred health sector as a major potential market.