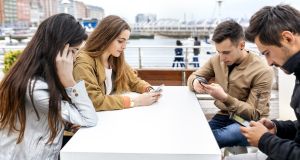 Ciara O’Brien tells us how to digitally detox.

Aer Lingus owner IAG has brushed off concerns in Brussels over the Anglo-Spanish airline group’s preferred strategy to continue flying freely in the event of a no-deal Brexit, reports Simon Carswell.

The Trump administration has vowed to come up with ways to ensure that China complies with trade commitments it makes to the United States, after three days of negotiations concluded in Beijing. Suzanne Lynch reports from Washington

Cantillon is a little worried that Irish consumer sentiment is steady but not stable, what to do if the used car you buy turns out not to be yours and why exporters need to wean themselves off Britain.

What is the purpose of the Public Services Card, wonders our columnist Karlin Lillington.

Had enough of screens of all sizes? Ciara O’Brien outlines how to digitally detox.

Marie Boran outlines the top six trends in AI for 2019. And yes, the ads from Minority Report feature.

Inside Business podcast: Apple and Samsung both reported revenue slumps for the last quarter of 2018. What’s going on? Analyst at Davy Stockbrokers Aidan Donnelly explains. Plus: Ibec is predicting a major slowdown in growth this year as the Irish economy approaches full capacity and “cost competitiveness erodes”. CEO of the employer’s group Danny McCoy joins Cliff Taylor to give his predictions for the economy in 2019 amid the threat of Brexit, Donald Trump’s tariffs and other drags on Ireland’s economic performance.

1 Wet pub openings fuelled rise in Irish Covid infection rates – report
2 Chris Johns: Economies may enjoy ‘roaring twenties’ if ministers learn lessons
3 Basic income for all: Has the Covid crisis given us a new economic model?
4 How long can Government afford to keep State pension age at 66?
5 Irish designer of Oxford vaccine: ‘I’ve never worked so hard in my life’
6 Promontoria barred from pursuing doctor over Ulster Bank loan
7 Only way is up for Stripe as valuation skyrockets
8 ‘I don’t need to do any of this. . .I don’t actually need to work.’
9 ‘It’s great to have the memories in real life, not just the cloud’
10 Direct sea routes to Europe offer certainty in choppy Brexit waters
Real news has value SUBSCRIBE