UDG Healthcare expects profit growth up to 13% this year 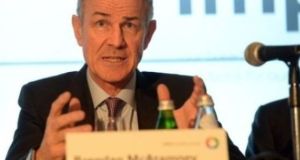 Dublin-based healthcare services company UDG Healthcare expects adjusted operating profit to be between 11 per cent and 13 per cent ahead of the $165.3 million (€136.5m) it reported in its full year 2020.

It said on Tuesday it expected adjusted diluted earnings per share to be between 9 per cent and 11 per cent ahead of the 47.7c reported last year.

Both of those projections have been made “before the amortisation of acquired intangible assets, transaction costs and exceptional items”.

The projections were made as part of a trading update issued by the company for the period October 1st to December 31st, 2020.

UDG said it has made “a good start” to the financial year with adjusted operating profit for its first quarter “ahead” of the same period last year.

Ashfield’s adjusted operating profit was described as “ahead of a strong comparative quarter last year”.

The Ashfield branch on Tuesday launched a “revised brand architecture and a new shared purpose” to drive increased collaboration and create a more integrated service offering for its clients.

Its Communications and Advisory branch has been rebranded as Ashfield Advisory and Health, while Ashfield Commercial and Clinical will now be called Ashfield Engage.

UDG said Ashfield’s investments in omni-channel capabilities and digital engagement prior to the pandemic enabled the division to provide new hybrid models of delivery to clients, “resulting in continued improvements in performance”.

Activity levels in both STEM and Ashfield Engage “demonstrated good sequential improvement compared to the second half of full year 2020”.

Ashfield completed the acquisition of PHMR, a market access consultancy employing over 40 people in the UK and Ireland, in January.

Meanwhile, Sharp continued to deliver a “strong performance” with adjusted operating profit “well ahead” of the same quarter last year.

This performance was primarily driven by continued strong demand from biotech companies for specialty packaging services across both the commercial and clinical businesses.