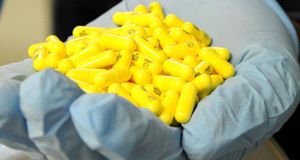 Aspen, a listed South African pharmaceuticals company that employs about 60 staff in Dublin, today announced it is to boost its Irish workforce to 100.

The company, which operates a quality assurance and research centre in Citywest, said it will add 42 new “high quality” jobs. Aspen, which makes HIV drugs for its home market and supplies branded and generic products to 150 countries worldwide, originally set up in Ireland in 2010 with a small supply chain management team.

It added another 44 staff to this in 2012, when it opened the quality centre at Citywest.

Today’s announcement was made by Richard Bruton, the Minister for Enterprise, who said the expansion was being “supported” by the IDA and his department.

EasyJet, American Airlines to cut 30% of staff amid coronavirus disruption 07:31
Irish economy to contract by 12%, ESRI forecasts 06:39
ESRI warns of biggest slump ever, Brown Thomas’ plans and Michael O’Leary has a point 06:30
Irish banks’ failure to innovate could leave them written off for good 06:30
The ‘new normal’ in Dalata Hotels will include face masks 06:15

1 Ross O’Carroll Kelly column 'not racist towards English people'
2 Beware of the rush to get back to normal business amid Covid-19
3 Irish economy to contract by 12%, ESRI forecasts
4 Brown Thomas and Arnotts shoppers will be able to book time slots for entry
5 ESRI warns of biggest slump ever, Brown Thomas’ plans and Michael O’Leary has a point
6 What is in the EU’s €750bn recovery plan and how will it affect Ireland?
7 Irish banks’ failure to innovate could leave them written off for good
8 EU needs to rebuild GDPR after only two years
9 Joint accounts: if one of us dies, can the other access the money?
10 Michael Smurfit: total lockdown of economies a ‘serious mistake’
Real news has value SUBSCRIBE