Pfizer to seek FDA approval for Covid-19 vaccine in November 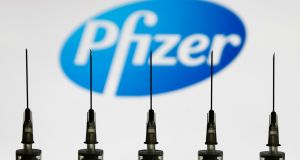 The Pfizer vaccine is being tested on 38,000 people worldwide. Photograph: Jakub Porzycki/NurPhoto via Getty Images

Pfizer will apply for emergency US approval of the Covid-19 vaccine it is developing with Germany’s BioNTech in the third week of November, the pharma group said, assuming it receives positive results from its current trial.

Albert Bourla, Pfizer’s chief executive, said in an open letter that he wanted to “provide greater clarity around the development timelines” of the vaccine, which is being tested on some 38,000 people worldwide.

No manufacturer outside Russia and China has been granted regulatory approval for a vaccine anywhere in the world, making Pfizer a frontrunner in the race.

While Mr Bourla’s statement showed the company’s trial was well advanced, it also clarified that the shot would not be available until after the US presidential election, on November 3rd.

President Donald Trump has previously said that a vaccine will be available “within weeks”, while officials have discussed a pre-election immunisation campaign. Pharma executives have pushed back against what they have described as the politicisation of the vaccine development process and alleged pressure from the White House to expedite clinical trials.

This month, in a memo to staff seen by the Financial Times, Mr Bourla said the “amplified political rhetoric” around vaccine development and timing was “undercutting public confidence”.

In the letter published on Friday, Mr Bourla said Pfizer could know whether the vaccine was effective by the end of October but cautioned that this data “may come earlier or later based on changes in the infection rates” among trial participants.

“To ensure public trust and clear up a great deal of confusion, I believe it is essential for the public to understand our estimated timelines,” he added.

Mr Bourla committed to publishing a full analysis of the results, whether positive or negative, “as soon as practical”.

To receive emergency authorisation from the US Food and Drug Administration, Pfizer will have to submit safety data on at least half of the trial participants, outlining how they reacted for two months following the final dose.

Pfizer and BioNTech’s vaccine, which relies on novel mRNA technology, is administered in two separate shots.

The companies have said that they will be able to produce 100 million doses worldwide this year, and at least 1.3 billion next year. The US has signed an agreement with Pfizer to secure 600 million doses, while the EU is negotiating a deal for 200 million doses. The UK and Japan are among several other countries to have also signed deals with the companies.

This month, the FDA’s European counterpart, the EMA, accelerated its approval process for the vaccine.

1 Revenue publishes list of companies tapping State for wage support
2 Trump vs Biden: Stakes are high for the Irish economy
3 Tighter regulations for car makers will drive buyers to choose electric
4 Stripe moves payment processing to Dublin due to Brexit
5 Bought a desk or a chair? Revenue rules out tax relief for home workers
6 Kennedy Wilson sells Baggot Plaza for $165m
7 Will remote working become the norm?
8 Irish homeowners must see rates relief if they make it through Covid turmoil
9 ‘Going abroad forced me to challenge assumptions that I had’
10 Corporate America is breaking with Donald Trump
Real news has value SUBSCRIBE