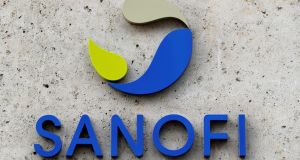 Irish life sciences investment group Malin is set to net up to about $145 million (€120 million) from the sale of British immunotherapy firm Kymab to French drug maker Sanofi.

The deal, which will see Sanofi pay $1.1 billion up front, will give it full rights to Kymab’s KY1005, an antibody therapy viewed as having the potential to treat a wide range of inflammatory disorders and immune-related diseases. KY1005 passed a mid-stage Phase IIa clinical trial in August.

The deal price could increase by $350 million based on reaching certain milestones, Sanofi said on Monday. Its shares were little changed in early trading.

The sale of Kymab represents a significant payout for Irish life sciences company Malin, which owns about 10 per cent of the issued share capital of Kymab. The sale of Kymab is expected to deliver initial net proceeds to Malin of about $112 million, with the potential to receive up to a further $33 million on the achievement of certain milestones.

According to Davy, this equates to a 420 per cent return on Malin’s initial investment.

Darragh Lyons, chief executive of Malin, said that the deal was a “significant milestone” for the company.

“We remain focused on working with our investee companies to achieve clinical and operational milestones and to realise our investments at optimal value inflection points,” he said, adding that €45 million of the upfront cash proceeds from the sale of Kymab will be used to repay its outstanding European Investment Bank debt of €45 million in full, with the balance to be used to initiate capital returns to shareholders, expected to happen during the second half of 2021.

The deal is the latest acquisition for Sanofi. In November it spent €308 million on Dutch biotechnology company Kiadis, which specialises in cell-based immunotherapy products to treat cancer. In August it scooped up US autoimmune diseases specialist Principia Biopharma for $3.7 billion, following a $2.5 billion investment to acquire immuno-oncology treatments group Synthorx in December 2019.

Sanofi was late to capitalise on the take-off of immunotherapy – drugs that activate the body’s immune system to attack tumour cells – in the early 2010s. It is now trying to catch up and is focusing on a pipeline of several medicines that it hopes will secure it a piece of the $100 billion-a-year cancer drug market. Kymab’s pipeline also includes KY1044, a cancer treatment currently in Phase I/II clinical development. The acquisition, to be paid in cash, is expected to be completed by the end of June.

Malin also said on Monday that a company in which it has invested, Immunocore, announced the completion of a $75 million Series C private financing round. Led by an existing investor in Immunocore, the Series C financing included support from existing investors and funds and accounts managed by BlackRock. Malin did not participate, and so the round will have a marginal dilutive impact on Malin’s ownership interest, which remains at 7 per cent of the issued share capital of Immunocore.

Immuncore said it would use the proceeds to further expand and accelerate its growing clinical stage pipeline of ImmTAXTM molecules.

6 Technology really can be stranger than fiction at times