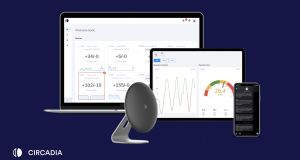 Circadia will be using a subscription model for the C100 with no up-front costs for hospitals and care homes.

A start-up co-founded and led by Limerick-born entrepreneur Fares Siddiqui has received fast-track approval in the United States for a remote monitoring system that can help detect Covid-19 symptoms, such as loss of breath.

London-based Circadia Health has just received the go-ahead by the US Food and Drug Administration (FDA) for its C100 system, a bedside device which is designed for use in healthcare settings.

Speaking to The Irish Times, Mr Siddiqui, Circadia’s chief executive, said the system eliminates the sort of patient-compliance issues involved with video-based monitoring solutions and, as it is remote, it can also help reduce the risk of infection transmission from patient to clinician.

“We had just filed for FDA approval when Covid-19 hit in early March,” he said. “The administration then announced a fast-track process for coronavirus-related solutions so we leapfrogged off that and got approved in just four months when it usually takes eight to 12 months for companies in our category to get the go-ahead.”

Circadia will be using a subscription model for the C100, which means hospitals and care homes will have no up-front costs to find budgetary room for. Reimbursement revenue of $123 per patient per month is possible under medical insurance schemes in the US.

Mr Siddiqui was born and brought up in Limerick after his parents moved to Ireland from Pakistan to study medicine at Trinity College Dublin. He co-founded Circadia in London with fellow Imperial College alumni Michal Maslik in 2016.

The start-up, which initially sought to sell its proprietary technology as a consumer device to monitor sleeping patterns, is close to completing a $5 million funding round as the company looks to commercialise the product.

Mr Siddiqui said Circadia had already met 50 per cent of its funding goal with well-known investor, journalist, author, businesswoman and philanthropist Esther Dyson among those committing to back the company.

Circadia got an early boost after it was selected to participate in well-known entrepreneur-turned-investor Sean O’Sullivan’s-backed Hax hardware accelerator programme in China.

It then went on to receive seed funding from Village Global, an early-stage venture-capital firm whose backers include Bill Gates, Mark Zuckerberg and Jeff Bezos.