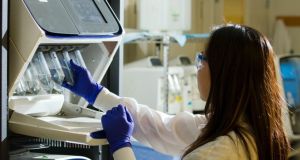 Qualio, a software company founded and led by Irishman Robert Fenton, has raised $11 million (€9.6 million) and intends to create a large number of jobs locally.

The San Francisco-headquartered company, which also has an operation in Dublin, has developed a quality management software platform for the life sciences sector the helps companies create, deploy and manage products in a compliant and safe manner.

Founded by Mr Fenton in 2012, Qualio has more than 1,000 clients including the German rare disease company Centogene and Poseida Therapeutics, the Malin-backed human therapeutics company, which recently filed for an initial public offering on the Nadsaq.

The Series A funding round was led by Storm Ventures, and with new investors Sorenson Ventures, and the founders of healthcare tech company Flatiron Health and fintech Plaid. Existing backers MHS Capital and Dublin and London-based VC Frontline Ventures also participated.

Storm is a near 20 year old VC that closed a sixth $130 million fund late last year. Among the companies it has previously backed include Marketo. Storm partner Arun Penmetsa is to join Qualio’s board.

The funding round only commenced on March 12th, the day of the worst Dow Jones Industrial Average decline since 1987. Mr Fenton said that securing investment during such uncertain times demonstrated the strength of the company’s software platform.

Mr Fenton, who hails from Mitchelstown, Co Cork, originally trained and worked as a pharmacist, and in quality control and R&D roles at companies including Pfizer before setting up Qualio.

Speaking to The Irish Times, Mr Fenton said he established the company are witnessing at first-hand how companies were struggling with quality and regulatory compliance.

He said as the company was ahead of market trends and therefore bootstrapped during the early years before he moved to California as the company began to scale. Qualio has raised $16.6 million to date, according to PitchBook.

The company currently employs 50 people, half of which are in Dublin, where most of the company’s R&D is done. Mr Fenton said he expects to have 70 people employed by the end of 2020. However, he added that Qualio is growing headcount “as fast as possible” and he expects to have “a couple of hundred employees” with the company by year end 2021, with many of these in Ireland.

Commenting on the fundraise, Mr Penmetsa said a critical factor in managing the lifecycle of products is quality management.

“Qualio addresses the challenges facing all life sciences companies by providing a comprehensive, flexible, easy-to-use but also rigorous system to help create, deploy and manage products in a compliant and safe manner,” he said.