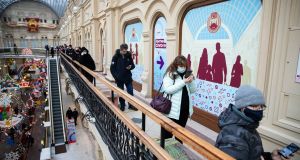 People queue to get Russia’s Sputnik V coronavirus vaccine in a vaccination centre in the GUM State Department store in Moscow on Wednesday. Photograph: AP

Hungary has become the first European Union country to give initial approval to Russia’s Sputnik V coronavirus vaccine, amid complaints from some member states about delays to the bloc’s rollout of its own vaccine programme.

Hungarian officials said on Thursday the country’s drug regulator had granted emergency clearance to Sputnik V and to another Covid-19 vaccine produced by Britain’s AstraZeneca, despite neither yet being passed safe for use by the European Medicines Agency (EMA).

Moscow has dismissed concerns over the transparency of data from its tests on Sputnik V and the speed with which it gained approval for use in Russia, and insists the vaccine is safe, more than 90 per cent effective, cheaper and easier to store and transport than some western rivals.

“Hungary is the first EU country to realise all the advantages of Sputnik V vaccine and authorise its use,” said Kirill Dmitriev, chief executive of Russia’s RDIF sovereign wealth fund, which has developed the vaccine with Moscow’s Gamaleya Centre.

“This decision is very important as it demonstrates that the vaccine’s safety and efficacy ... are highly regarded by our partners in Hungary.”

Hungarian media said the country’s health authorities were still assessing Sputnik V before giving final approval for its use.

“We only want to procure vaccines that have been already used on several million people and ones that Hungarian authorities deemed safe and effective and that they’ve approved,” said Gergely Gulyás, chief of staff to Hungarian prime minister Viktor Orban.

Hungarian foreign minister Péter Szijjártó is expected to hold meetings in Moscow on Friday to discuss the possible purchase of Sputnik V, which the Kremlin hailed as the world’s first registered coronavirus vaccine last August, when Russian regulators approved it before phase three clinical trials had even begun.

On Thursday, however, he said Russia’s supply problems seemed to have been resolved. Hungary has also agreed to buy more than a million doses of Covid-19 vaccine from Sinopharm of China once it has been approved.

The maker of Sputnik V announced on Wednesday that it had filed for “registration [of the vaccine] in the EU and expects it to be reviewed in February”.

Hungary is one of several EU countries that have accused the bloc of being too slow to approve, source and distribute vaccines to member states. The EMA has so far given the green light only to vaccines made by Moderna and Pfizer/BioNTech, and expects to clear the AstraZeneca vaccine in the coming weeks.

German chancellor Angela Merkel has said the possibility of joint production of Sputnik V in the EU could be discussed if the vaccine receives EMA approval.

7 Boxever bought by US firm Sitecore in multimillion-euro deal

8 Benefits of data protection regulation come at a price

9 Irish designer of Oxford vaccine: ‘I’ve never worked so hard in my life’