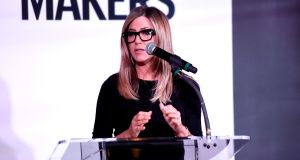 Actor Jennifer Aniston is among the celebrities who have endorsed Viviscal. Photograph: Frazer Harrison/Getty Images

Galway-based entrepreneur James Murphy has sold his Viviscal hair restoration brand to the owner of Arm & Hammer toothpaste for a price understood to be in the region of €150 million.

Mr Murphy is the founder of beauty products group Lifes2Good, out of which Viviscal was carved in a restructuring last year. The buyer, the $11.5 billion (€10.8 billion) listed US giant Church & Dwight, is preparing to announce the deal next month.

It is understood Church & Dwight is buying the subsidiary Viviscal Ltd, which owns the celebrity endorsed hair restoration brand that is sold in more than 25,000 stores across the United States.

The holding company is backed by investors including BDO Development Capital Fund, which pumped €5 million into the business in 2015. Mr Murphy retained majority control of the group.

After the disposal of Viviscal, Lifes2Good will continue under its current ownership selling its remaining brands, which include Sonic Chic toothbrushes and Pettura pet products.

It is understood Mr Murphy’s company was advised on the deal by speciality beauty industry investment bank, Michel Dyens, based in New York and Paris.

Rick Dierker, the chief financial officer of Church & Dwight, said the company has no plans to comment “at this time”. He said the group releases its earnings report on February 7th and “would mention any transaction at that time along with details”.

The deal marks a stunning success for Mr Murphy, a member of the Galway Tenors singing group who founded Lifes2Good 20 years ago.

Viviscal has grown fast in the US market in recent years, and has been endorsed by celebrities including Jennifer Aniston, Gwyneth Paltrow, Cate Blanchett, Reese Witherspoon and Miley Cyrus.

The product promotes hair growth using a compound called AminoMar, and is available for men and women. The male version of the product is endorsed by celebrities including Rob Kardashian and former rugby player Kyran Bracken.

As well as its sales in Europe, Viviscal is available across the US in major chains such as CVS, Walgreens and Wal-Mart.

The overall Lifes2Good group reported sales last year of €50 million, with operating profits of about €3 million. Viviscal Ltd acquired the intellectual property for the brand in a restructuring a year ago, in a €13 million deal.

Church & Dwight owns a wide range of brands, including Arm & Hammer, which accounts for the bulk of its sales via its branded toothpaste, household detergents and deodorants. It also owns Trojan condoms and Orajel toothpaste.