Deal comes days after final US approval for controversial drug 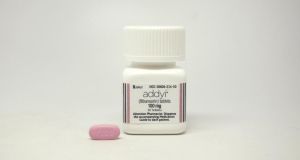 The drug could cost women as much as $400 per month

Valeant will also give tightly-held Sprout a share of future profits if certain milestones are achieved, according to a statement on Thursday.

Buying Sprout would move Valeant, which specialises in eye care and dermatology, into the women’s health market. Valeant’s strategy is to grow through acquisitions. The company has announced 12 purchases in the past year valued at $14.9 billion, according to data compiled by Bloomberg. The biggest is the $11.1 billion purchase of Salix Pharmaceuticals for gastrointestinal disorder treatments.

Sprout’s pill received approval on Tuesday from the US Food and Drug Administration. The drug has been controversial due to modest benefits and serious side effects, and was caught up in a debate about whether male sexual dysfunction has received more attention. Valeant said it will use its “global scale” to market the drug internationally. The purchase will have no effect on earnings this year and will add to earnings in 2016, it said.

Sprout chief executive Cindy Whitehead will join the company to lead the division. Sprout acquired the rights for flibanserin for an undisclosed amount from Boehringer Ingelheim in 2011, after the FDA told Boehringer that the drug hadn’t been proven safe or effective. Sprout conducted new tests with new measures of how women’s sexual desire was measured.

Hurdles in marketing the pill will include convincing insurers to cover it, and educating doctors and patients on the benefits and risks. Without insurance support, women may have to pay as much as $400 a month to try the pill, called Addyi, or flibanserin. The FDA has said that doctors will have to take a training course to be certified to prescribe the drug. Patients must sign a form acknowledging risks that include fainting and extreme sleepiness.