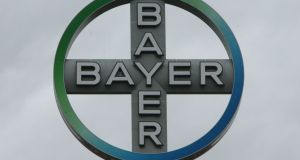 Bayer’s pharmaceutical division continues to grow, with sales in 2016 likely to top €16 billion.

Earnings before interest, taxes, depreciation and amortisation (ebitda), and excluding some costs, climbed to €3.05 billion, the company, based in Leverkusen, said on Wednesday.

Bayer also pared its sales forecast for 2016. Shares of Bayer rose 1.2 per cent to €94.53 in eary Frankfurt trading. The stock has declined 18 per cent this year.

The pharmaceutical division continues to grow, with sales in 2016 likely to top €16 billion because of its newly launched drugs, Bayer said. Those include blood thinner Xarelto and eye treatment Eylea, which accounted for a quarter of its pharmaceutical sales last year, as well as cancer drugs Xofigo and Stivarga, and Adempas, to treat a deadly lung disease.

The results are likely to be overshadowed by any comments on Bayer’s $55 billion bid to acquire Monsanto. Werner Baumann, who became chief executive officer in May after more than 20 years with the company, aims to make it the world’s largest producer of seeds and pesticides with the deal. His revised offer, which included a $3-per-share increase, was spurned earlier this month.

Sales this year, including revenue generated from Covestro following its spin-off from Bayer, will probably climb to €46 billion to €47 billion, the company forecast. That’s down from an earlier projection of more than €47 billion. Ebitda before special items is likely to rise by a high-single-digit percentage, rather than a mid-single-digit percentage, it said. – (Bloomberg)