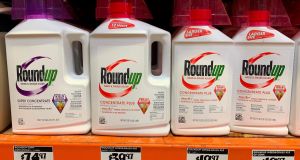 A surge in Roundup claims, along with some big court losses, have weighed on Bayer since it spent $63 billion to buy Monsanto – which developed the weedkiller.

Bayer has reached verbal agreements to resolve a substantial portion of an estimated 125,000 US cancer lawsuits over use of its Roundup weedkiller, according to sources.

The deals, which have yet to be signed and cover an estimated 50,000 to 85,000 suits, are part of a $10 billion (€9.1 billion) Bayer plan to end a costly legal battle the company inherited when it acquired Monsanto in 2018, sources said.

While some lawyers are still holding out, payouts for settled cases will range from a few million dollars to a few thousand each, said the sources.

A surge in Roundup claims, along with some big court losses, have weighed on Bayer since the Leverkusen, Germany-based company spent $63 billion to buy agricultural giant Monsanto – which developed the weedkiller.

The shares have dropped about 40 per cent since the deal closed two years ago, wiping out some $39 billion of Bayer’s market value. The shares gained as much as 4.6 per cent Monday, according to Tradegate.

Bayer is likely to announce the settlements, which need approval from the company’s supervisory board, in June, sources said.

None of the deals has been signed, though plaintiffs’ lawyers are expected to do so on the day of the announcement, the sources said.

Chris Loder, a US-based spokesman for Bayer, declined to comment on specifics about the talks, but said the company had made “progress in the mediations” that arose from lawsuits.

“The company will not speculate about settlement outcomes or timing,” Mr Loder said in an emailed statement.

“As we have said previously, the company will consider a resolution if it is financially reasonable and provides a process to resolve potential future litigation.”

The exact number of settlements so far was not immediately clear, but the estimate of at least 125,000 claims is more than twice the amount of Roundup litigation cases Bayer has disclosed so far.

Before now, a complete tally was hard to pin down. In regulatory filings, the company only acknowledged filed and served cases of about 52,500 as of April. Tens of thousands more are being held in abeyance by plaintiffs’ lawyers under agreements with Bayer, sources said.

Ken Feinberg, the chief Roundup mediator, said in January the total was 85,000 and would likely increase. Bayer has said it would earmark $8 billion to resolve all current cases, including those held in abeyance, according to some of the people familiar with the settlements.

The deals so far involve many of the strongest claims against the company, sources said. – Bloomberg

1 If international visitors are pariahs should we not be testing them on arrival?
2 Varadkar to meet banks in row over interest on mortgage payment breaks
3 Belgium helps Ireland to a Brexit boon
4 WeWork on track for profits and positive cash flow in 2021, says chairman
5 Can Grafton Street stop the flood of closures?
6 ‘My rent here is so low it’s a joke’
7 New Powerscourt Springs hotel to open in defiance of virus gloom
8 This charming man: how Paschal Donohoe won the Eurogroup presidency
9 How to . . . move (almost) everything to your new phone
10 Help, I’ve no PRSI stamps – can I still get a pension?
Real news has value SUBSCRIBE