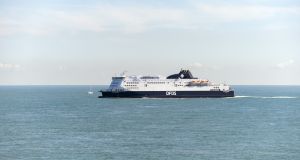 The additional frequency and capacity on the route coincides with the start of the phased introduction of new border controls by the UK government on imports from the EU. Photograph: iStock

Danish shipping company DFDS has added a fourth ferry to the Rosslare to Dunkirk route in northern France as demand for Britain-bypassing routes continues to rise post-Brexit.

The company’s freight vessel, the Ark Dania, will commence sailings on April 1st, adding another ship to a route launched just two months ago as a direct service to Europe to avoid the UK.

The service will bring the number of weekly direct sailings between Rosslare and continental Europe to 36 as more businesses seek to bypass border controls on the UK “landbridge”.

The additional frequency and capacity on the route coincides with the start of the phased introduction of new border controls by the UK government on imports from the EU.

The new ferry will be able to carry up to 176 unaccompanied lorry trailers along with 12 driver-accompanied trailer units.

“We have a huge demand from all sectors of industry looking to use the direct route to north-central Europe as more and more realise the benefits of using the direct route compared to the UK landbridge,” said Aidan Coffey, route director at DFDS.

“As further border control procedures are implemented by the UK government in the coming weeks, additional direct services from Rosslare Europort to avoid the landbridge are timely and will be very welcomed by all industries across Ireland. ”

The landbridge was traditionally the preferred route to mainland Europe because it was the quickest and cheapest, but new EU-UK border checks since the UK’s departure from the economic bloc came into effect at the end of last year have added delays and uncertainty.