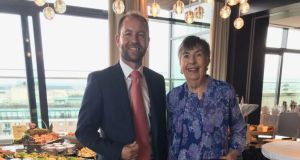 She set up O’Mara Travel in 1978 and worked there until 2006 when the travel agency was sold to Abbey Tours and Sunway Holidays.

Originally from Limerick, she lived in Dublin from a young age and died in recent days at her home in Carrickmines, south Dublin, following a terminal cancer diagnosis in recent months.

She was the chair of the Great Southern Hotels group from 1984 to 1999, and chair of Forbairt from 1993 to 1998, which was a semi-State agency set up to promote Irish industry and a forebearer of Enterprise Ireland.

She was also the chair of Opera Ireland, and a trustee of Dublinia, a not-for-profit Viking heritage centre beside Christ Church Cathedral in Dublin.

Upon her retirement after the sale of O’Mara Travel she wrote a memoir published by Lilliput Press. She was conferred with an honorary doctorate by Dublin Institute of Technology in 2006 for her contribution to the Irish tourism industry.

She is survived by her son Eoghan O’Mara Walsh, who worked with her in the family’s travel company for 15 years, and is now the chief executive of ITIC - the domestic tourism association she founded in the mid-80s.

His mother had a life and career “steeped in tourism,” Mr O’Mara Walsh told The Irish Times. Even in retirement she was still heavily involved in many advisory roles across the industry and was never “going to retire and just take up knitting,” he said.

“We were so lucky that she died at home and wasn’t stuck in a hospital with all the current visiting restrictions,” he said.

However, due to coronavirus restrictions on gatherings only 10 people would be permitted to attend the funeral service, which was a “real shame,” he said.

“She had hundreds and hundreds of friends, I’ve been getting texts all day, there were so many people in the business and art world, and then just other friends of 50 years,” he said.