Was Micheál Martin right to say State didn’t bail out the banks? Not exactly

Taoiseach Micheál Martin, responding to Richard Boyd-Barrett TD in the Dáil, has said that the "banks were not bailed out" during the economic crash. Video: Oireachtas TV 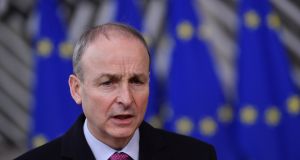 The Taoiseach, Micheál Martin: “I’ll talk to you about the banks. The banks were not bailed out.” Photograph: EPA

The Taoiseach Micheál Martin insisted in the Dáil on Wednesday that the State’s banks “were not bailed out” following the property crash a decade ago.

However, there is no getting around the fact that the State’s six domestic lenders at the time of the crash ended up being bailed out – even if the Taoiseach was correct in his follow-up remark that shareholders ended up being wiped out in the process.

The Fianna Fáil-led government’s snap guarantee of the six banks and building societies in September 2008 resulted in it and the following administration, led by Fine Gael, committing €64 billion to the banks between 2009 and 2011 to make good on the pledge as loan losses soared.

Otherwise, the gaping hole in banks’ balance sheets as a result of the losses would have resulted in them going bust, as they would not have had enough money to pay back depositors and senior bondholders (let alone retain enough capital in reserve to allow them to hold onto their banking licences).

Anglo Irish Bank and Irish Nationwide Building Society were nationalised in the process and ultimately put into wind-down mode. The State ended up owning more than 99 per cent of both AIB and Permanent TSB (PTSB). AIB was ordered by the Government to take over EBS in 2011, while taxpayers were also left with a 14 per cent interest in Bank of Ireland.

The State ended up entering a €67.5 billion, three-year international bailout 10 years ago this month, largely because it had been frozen out of global bond markets as investors fretted about the ultimate cost of the bank bailout bill.

Banks also imposed €15 billion of losses on junior bondholders between 2009 and 2011 – some of it under the direction of the Government as it secured High Court orders under temporary emergency banking legislation during the crisis.

Senior bondholders and depositors were largely spared, save for a small number in Anglo Irish Bank, when its successor company, Irish Banking Resolution Corporation (IBRC), was put into liquidation in February 2013.

This triggered €147 million of payments to remaining IBRC depositors from the crisis-time government banking guarantee scheme and the Central Bank’s deposit guarantee plan, and well as €934 million to guaranteed bondholders.