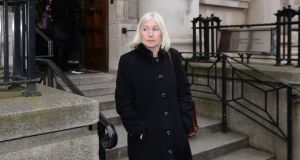 Ulster Bank’s chief executive in the Republic, Jane Howard, conceded on Tuesday that five months of uncertainty around the lender’s future in Ireland added to the stress levels of its 2,800 staff as they grappled with the impact of the Covid-19 crisis.

“You might think that perhaps there could have been a warning or a ‘heads up’. However, up until the board makes a decision, there is no certainty as to the final outcome of the review,” Ms Howard told the Oireachtas finance committee during a hearing on the matter.

“I accept that this situation, the ongoing media speculation and some of the communications issued to colleagues have added to the stress of the situation. Our colleagues were rightly frustrated and worried with the level of information that we could share with them.”

Financial Services Union general secretary John O’Connell said Ulster Bank’s staff were “subject to abysmal treatment” as the bank and NatWest allowed uncertainty over the future of the unit to continue for months.

Ms Howard said the bank was bound by “confidentiality restrictions” and was not able to communicate to colleagues until a decision had been made. NatWest’s board made the final decision late on Thursday.

Ulster Bank had turned down invitations to appear before the Oireachtas finance committee until now.

“Our decision not to meet before now was rooted in the reality that all matters relating to the review, including timelines, financial considerations, as well as any arrangements NatWest Group may have in place with external advisers, were, and some still are, commercially sensitive,” she said.

“The deliberations of the executive and board of NatWest Group on matters such as this were not something that could be shared publicly.”

AIB said on Friday it plans to buy €4 billion of Ulster Bank loans to large and medium-sized companies. Permanent TSB (PTSB) also said that it was in early discussions on buying assets from the exiting bank.

Sources said the lender is in talks to acquire most of Ulster Bank’s €14 billion mortgage book and up to €700 million of small business loans in a deal that could almost double its assets.

However, it is likely that the bank may only end up taking between €5 billion and €6 billion of Ulster Bank assets onto its balance sheet, reducing the amount it would need to tap the State for.

Ulster Bank is set to enter into an “extensive consultation process” with the Financial Services Union and other staff representative bodies, Ms Howard said. It has committed to not carrying out “new compulsory redundancies” or closing any of its 88 branches this year.

However, it emerged during the meeting that the bank is proceeding with 40 compulsory redundancies as it seeks to complete a plan, announced last September before news of the strategic review broke, to eliminate 266 jobs. The bulk of the number was met by way of voluntary severance.

It is understood that as many as 300 jobs are likely to transfer to AIB as part of a commercial loan book sale. Ms Howard said that job transfers “will be core to any negotiations” on further loan or asset sales as part of the wind-down.