UK fines State Street £23m for overcharging NTMA and others

Bank acted with ‘complete disregard’ for interests of its customers 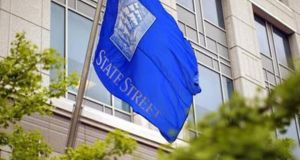 Britain’s financial watchdog fined State Street £22.9 million for deliberately overcharging its clients, and said the custody bank acted with “complete disregard” for the interests of its customers.

The fine is one of the largest imposed by the watchdog in recent years, and the latest where financial firms have been found to put profit before the interest of their customers.

Those clients included the NTMA and large investment management firms and pension funds holding the funds and savings of retail investors. Custody banks manage cash for companies and handle back-office processing of securities and banking transactions for fund managers.

The FCA said the firm had developed and executed a deliberate strategy to charge substantial mark-ups on agreed fees. The overcharging contributed over a quarter of revenues at the business unit responsible for the failings. The overcharging was also concealed from clients, the FCA said, and only came to light after one discovered the mark-ups on certain trades that had not been agreed and notified State Street staff.

“The findings we publish today are another example of a firm that has acted with complete disregard for the interests of its customers,” Tracey McDermott, director of enforcement and financial crime at the FCA, said.

Lloyds TSB Bank was fined £28 million in December for the way it encouraged staff to sell products that customers did not need, while Clydesdale Bank was charged £8.9 million in September for a mix-up in the amount it charged more than 40,000 mortgage clients.

State Street said in a statement it deeply regretted the failings and had worked hard to enhance its controls over the past few years. The firm also dismissed staff in 2011 who were centrally involved in the overcharging.

“Their behavior was unacceptable and a significant departure from the high standards of conduct and transparency that we expect and certainly not consistent with the manner in which our employees act on behalf of clients every day,” it said.

The FCA said that when those responsible for the mark-ups were contacted by the client, the staff claimed both to the client and later to State Street UK’s compliance department that the charging was an inadvertent error. They arranged for a substantial rebate to be paid but failed to disclose the existence of further mark-ups on other trades.

State Street was given a 30 per cent discount on its fine for settling with the FCA at an early stage.