The life and times of Seán FitzPatrick 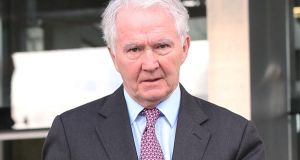 The judge in the trial of the former chairman of Anglo Irish Bank Seán FitzPatrick on Tuesday acquitted him on all charges at the Circuit Criminal Court.

This is how the story unfolded.

April 1998: FitzPatrick says revelations about interest loading, fee charges and offshore banking means financial institutions must “enthusiastically embrace the concept of transparency” if public confidence is to be restored.

September 1998: FitzPatrick is appointed to the board of the Dublin Docklands Development Authority (DDDA).

May 2002: Shares in Anglo soar to a new high as the bank reports a much stronger-than-expected half-year performance. Anglo is capitalised on the Dublin stock market at around €2 billion, making it the ninth-biggest Irish company.

May 2003: FitzPatrick says the Companies Bill, which seeks to make company directors liable for any break down in compliance, will create “a more hostile environment for business”, increase costs and damage competitiveness.

February 2004: FitzPatrick raises €27.6 million by selling two million shares in Anglo, which represents just less than half of his total holding.

June 2007: Fitzpatrick tells a Dublin dinner that business people had created the Celtic Tiger boom and that Ireland’s regulatory regime had gone far enough. “It is time to shout stop,” he declared. “We should be proud of our success, not suspicious of it. Our wealth creators should be rewarded and admired not subjected to levels of scrutiny which convicted criminals would rightly find intrusive.”

December 2008: FitzPatrick resigns from the bank as the financial regulator investigates the temporary transfer of €87 million in loans between Anglo and Irish Nationwide Building Society over an eight-year period. He also steps down from the boards of Aer Lingus and Smurfit Kappa.

January 2009: It emerges that FitzPatrick owed Anglo €129 million around the time of its financial year end in September 2007.

January 2009: Minister for finance Brian Lenihan says the Government has “no option” but to nationalise Anglo and will consider using the bank as a repository for bad loans.

He says the “unacceptable practices” of FitzPatrick have done “serious reputational damage to the bank”.

February 2009: It emerges that Anglo lent €451 million to 10 clients to purchase up to 10 per cent of businessman Seán Quinn’s holding in the bank via contracts for difference. The move is made in order to prop up the bank’s share price.

February 2009: Gardaí from the Bureau of Fraud Investigation, working with the Office of the Director of Corporate Enforcement, raid Anglo-Irish’s Dublin offices.

October 2009: Minister for finance Brian Lenihan says he is “frustrated” bankers have not yet been prosecuted over the scandals that have engulfed the sector.

March 2010: FitzPatrick is arrested after members of the Garda fraud squad raid his home at 6.15am. He is taken to Bray Garda station and detained under Section 10 of the Criminal Justice (Theft and Fraud Offences) Act 2001. A computer and a large quantity of documents are taken from his home.

March 2010: Anglo takes legal action against FitzPatrick in an attempt to recover unpaid loans of €70 million.

March 2010: Anglo reports a pretax loss of €12.7 billion for the 15 months to end of December 2009 after writing off €15 billion in bad loans. The losses are believed to be the largest in the State’s corporate history.

July 2010: FitzPatrick is declared bankrupt by the High Court. His lawyers tell the court he is “bowing to the inevitable” after Anglo block an offer of his family home and half of his pension in a proposed settlement deal.

December 2011: FitzPatrick is arrested a second time by gardaí as part of an investigation into “financial irregularities”. He is released without charge and a file is prepared for the Director of Public Prosecutions.

July 2012: FitzPatrick is arrested a third time. He is charged with 16 offences relating to his role in advising on and lending millions to a golden circle of investors to falsely inflate Anglo’s share price.

September 2013: DPP Claire Loftus contacts the Government to say steps must be taken to prevent the upcoming Banking Inquiry from compromising court proceedings against the former Anglo executives.

January 2014: A jury is sworn in for the trial of FitzPatrick, Whelan, and McAteer. It is the first in the history of the State to have 15 members.

April 2014: FitzPatrick is acquitted on all charges against him in relation to the Maple 10 case at the Dublin Circuit Criminal Court, following a majority verdict by the jury after 13 1/2 hours hours deliberation.

April 2014: McAteer and Whelan are found guilty on 10 counts of providing unlawful financial assistance to 10 individuals. They are spared jail by Judge Martin Nolan who says it would be unjust given “a State agency had led them into error and illegality”.

June 2014: Judge Martin Nolan rejects an application by FitzPatrick that he should not be liable for the cost of defending himself during the 48-day trial.

September 2014: FitzPatrick is granted legal aid for his upcoming trial on charges of failing to disclose to auditors the true value of loans worth at least €139 million given to him by Irish Nationwide Building Society from 2002 to 2007.

June 2015: The jury is discharged in the trial after seven weeks of legal argument in the absence of the jury. Legal issues are dealt with and a new trial date is set.

August 2015: Three former executives of Anglo become the first bankers to go to jail in Ireland since the economic crisis broke. Former chief operations officer Tiarnan O’Mahoney (56), former company secretary Bernard Daly (67), and Aoife Maguire (62), a former assistant manager, are given custodial sentences for their role in a conspiracy to hide bank accounts from the Revenue Commissioners.

April 2016: The convictions of Daly and O’Mahoney are quashed in the Court of Appeal. O’Mahoney is sent back for retrial, while Maguire, who appealed her sentence, but not her conviction, is set free.

November 2016: FitzPatrick goes on trial accused of misleading the bank’s auditors over a five-year period. The case is plagued with delays due to continuing legal argument, as well as other issues.

January 2017: It emerges in court that Kevin O’Connell, a solicitor with the Office of the Director of Corporate Enforcement, shredded documents relevant to the inquiry. It also emerges that two EY auditors who are to give evidence were coached. Bernard Condon SC, for FitzPatrick, argues the investigation was unfair.

March 2017: The case becomes the longest running criminal trial in the history of the State.

May 2017: Judge John Aylmer directs that FitzPatrick be acquitted after strongly criticising the investigation by the Office of the Director of Corporate Enforcement.