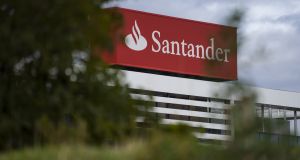 Banco Santander: Spain’s mortgage tax varies from 0.5 to 1.5 per cent of the loan, depending on where it is collected. Photograph: Angel Navarrete/Bloomberg

In a controversial decision, Spain’s supreme court has reversed a recent ruling, ensuring that homebuyers and not banks pay a mortgage tax.

The court had ruled last month that banks were liable to pay the tax rather than their clients, who had paid it until then, triggering substantial losses for lenders on the stock market. In an unusual move, the presiding judge, Luis María Diez-Picazo, announced the next day that the court would reconsider the ruling due to its “enormous economic and social repercussions”.

Twenty-eight magistrates met on Monday to deliberate, continuing throughout Tuesday, when they ruled 15 to 13 that banks’ customers should pay the tax.

The financial sector had feared that an adverse ruling would have triggered a barrage of lawsuits by homeowners to claim back taxes they had already paid.

The tax varies from 0.5 per cent to 1.5 per cent of the loan, depending on the area of Spain where it is collected. Estimates regarding how much the ruling could have cost the financial sector varied, although credit risk agency Moody’s put the figure at €2.3 billion if the ruling were implemented retroactively over four years, which had appeared to be a possibility.

Spain’s mortgage tax is the highest in the European Union, according to property-buying portal Idealista. In many countries, including Ireland, the charge does not exist.

There were demonstrations outside the supreme court as the magistrates deliberated and the fact the court had decided to revise its own previous ruling had drawn claims that it was vulnerable to pressure from the financial sector.

Straight after news of the final ruling, the leader of the leftist Podemos party, Pablo Iglesias, called for demonstrations and tweeted: “The banking sector wins, Spaniards lose. The independence of the supreme court is in question; democracy is weakened.”