French bank cuts profitability target after fall of 6.3 per cent in fourth-quarter revenue 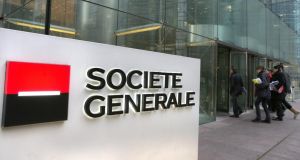 Société Générale said it would not meet its 3 per cent revenue annual growth target after revenue fell 6.3 per cent in the fourth quarter. Photographer: Judith White/Bloomberg

Société Générale has cut its profitability target after the French bank was hit by a fourth-quarter market downturn, joining other European banks battling a tough environment.

The country’s third-largest listed bank expects its return on tangible equity to be between 9 and 10 per cent in 2020, down from a previous target of 11.5 per cent.

Société Générale also said it would not meet its 3 per cent revenue annual growth target after revenue fell 6.3 per cent in the fourth quarter to €5.93 billion, in line with analyst forecasts collected by Infront Data.

Profits at SocGen’s corporate and investment banking business fell by more than half during the quarter and the bank now plans to cut €500 million in costs at this business.

“In a rough environment, most notably at the end of last year, the performance of our market activities was disappointing,” SocGen’s chief executive Frederic Oudea said.

SocGen had issued a profit warning three weeks ago, hitting its shares. The stock was down 3.7 per cent in early afternoon trading on Thursday. – Reuters