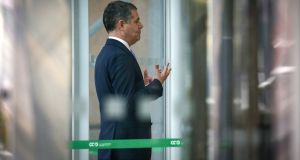 More small and medium-sized enterprises (SMEs) report making a loss since the onset of Covid-19 than report making a profit, although demand for bank finance has remained stable, according to the latest SME credit demand survey published by the Department of Finance.

Only 29 per cent of the more than 1,500 SMEs surveyed for the Department reported increased or stable turnover since the arrival Covid-19. This compares to 80 per cent that did so over the same period in 2019.

The turnover of all businesses across all SME sectors was “significantly lower” than corresponding levels registered at any stage throughout the SME credit demand survey series, which has been conducted biannually since 2011, the Department said.

The greatest decline – a drop of 96 per cent – was found in the hotels and restaurants sector.

Overall some 35 per cent of SMEs reported making a loss since March, while 31 per cent said they were making a profit.

Almost a fifth – 18 per cent – of SMEs have applied for bank finance since the advent of the Covid-19 crisis, the survey conducted by Fitzpatrick Associates in conjunction with Behaviour and Attitudes found.

This is slightly lower on the proportion that did so in the same period in 2019. Intention to apply for credit has also dropped year-on-year.

The majority of SMEs that did not apply for credit reported that they had sufficient internal funds and did not need external finance in the March-October period. About a fifth said they did not wish to be indebted, while a smaller number believed their current lines of credit were sufficient.

The average cost of credit on outstanding loans was reported at 5.8 per cent, up from 5.1 per cent in September 2019. However, 35 per cent of SMEs were not certain of the interest rate attaching to their loans.

Some 15 per cent of SMEs that made applications for new bank finance were declined. This was up 1 percentage point on September 2019.

“One of our main concerns is to ensure that SMEs continue to have access to sufficient liquidity, and that access to credit for SMEs is maintained,” said Minister for Finance Paschal Donohoe.

“The Government has announced a range of measures to assist companies deal with the consequences of the Covid-19 restrictions, and to ensure that they have access to sufficient liquidity and I particularly welcome the high level of awareness among SMEs for these supports.”

Meanwhile, almost two-thirds of SMEs reported that they had no pre-Covid unpaid invoices. The average number of pre-Covid invoices that remain unpaid across all SMEs was 10 per cent.