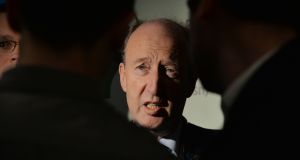 Minister for Transport Shane Ross said the dispute will be resolved in a way that will ensure ‘connectivity will continue’ for passengers wherever they live. Photograph: Alan Betson

Trade union Siptu has told its members in Bus Éireann to prepare for a protracted strike. It also urged them to support a political campaign targeting TDs in rural constituencies who support the Government. The State-owned transport company is expected to announce shortly whether it is going to unilaterally impose significant cuts to staff earnings as part of a survival plan. Unions have warned such a move will trigger an all-out indefinite strike.

The board of Bus Éireann is expected to meet on Monday to consider its position.

Minister for Transport Shane Ross said the dispute would be resolved in a way that would ensure “connectivity will continue” for passengers, wherever they lived. He told RTÉ that while the company’s subvention was initially cut, it was increased in the last two years and would be further increased over the coming years.

According to Mr Ross, the National Transport Authority had said “absolutely clearly that wherever they are in Ireland, if Expressway or if private operators can’t operate in that particular place, they will step in and make sure the subvention is used to make sure that rural communities are not isolated”.

The National Bus and Railworkers’ Union (NBRU) has warned that any move to wind up the company could face serious obstacles. It said the 1986 Transport Act laid down that a resolution for voluntary winding up could not be adopted without the consent of both Houses of the Oireachtas.

“So, based on the recent Private Members’ Motion in the Dáil, supported by all parties and [those in] none, with the exception of Fine Gael and Independent Alliance, one could deduce that there might be some mathematical difficulty in getting sufficient numbers of TDs to support such a resolution in either House of the Oireachtas.”

It said the company’s management would have to prove it could not pay its bills in order to seek a compulsory winding up by a court. “Our expert advice from the reading of their annual accounts would be a strong argument against this line of action and the NBRU would oppose any such application.”

Siptu sector organiser Willie Noone said it was becoming clear an indefinite strike was becoming unavoidable “due to the inertia and inaction shown by the Department of Transport, the National Transport Authority, the Minister of Transport and the fact that TDs in Government from rural areas in particular who are propping up the Government are gone into hiding”.

As a result, the focus must be to prepare for “the hard battle and struggle that lies ahead,” he said in a statement. “Due to the above and the combination of the unfairness, harshness and depth of the pay cuts threatened, the draconian elimination of all conditions of employment and the unrealistic burden of trying to reduce payroll costs by a further €12 million a year when workers have already contributed to a reduction of 10.3 per cent of payroll costs between 2009 and 2015, this dispute has all the ingredients of guaranteeing that the dispute will not be a dispute ending in the short term and hence we must prepare accordingly.”

Mr Noone said placards and other materials for strike action had been sent from the union’s headquarters in Liberty Hall in Dublin to its offices in Cork, Waterford, Tralee, Galway, Castlebar, Letterkenny, Drogheda and Sligo.

“Arrangements are in place with local representatives to have these materials available in all Bus Éireann work locations.

“All Siptu members in Bus Éireann will participate in the strike action and take part in pickets, with the exception of school bus drivers. They are not currently involved in the dispute and have yet to be balloted on strike or industrial action. However, this situation is under constant review.”