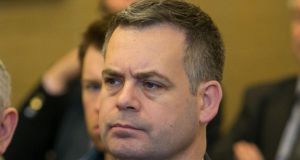 The Central Bank of Ireland has warned the Department of Finance that a proposed new Bill from Sinn Féin that would prevent a bank from selling a mortgage without the borrower’s consent could trigger unintended consequences such as an increase in interest rates.

According to sources, the regulator has told the department in an opinion issued on Monday that while the draft No Consent, No Sale Bill 2019, unveiled by Sinn Féin finance spokesman Pearse Doherty in the Dáil last week, was well-meaning, banks’ reduced ability to sell non-performing loans (NPLs) could lead to financial stability risks for the system and the State.

The Central Bank is also understood to have highlighted that the enactment of such laws may result in banks having to hold more regulatory capital on their books, limiting their ability to lend to households and businesses.

In addition, the regulator has signalled that banks may increase their lending rates as the Bill will further impact their ability to realise the underlying collateral when borrowers default.

The average standard variable rate for new loans in Ireland stood at 3.08 per cent in September, compared with 1.76 per cent across the euro zone.

The Central Bank added that the proposed legislation does not offer new consumer protections to borrowers as their loans remain subject to various statutory codes of conduct irrespective of who owns them.

Permanent TSB became the first Irish bailed-out lender to put a pool of problem owner-occupier loans on the market last year. It agreed to sell €2.1 billion of private dwelling and buy-to-let loans (BTL) to an affiliate of private equity firm Lone Star last July, and refinanced €1.3 billion of NPLs in November in a bond deal.

AIB also sold BTL loans as part of a portfolio sale in 2018, while Ulster Bank sold a batch of private dwelling and BTL loans, and KBC Bank Ireland disposed of BTL debt. Bank of Ireland has signalled that it may follow suit.

Mr Doherty said in response to questions from The Irish Times that the regulator “has consistently sided with the banks when any sort of pro-consumer legislation is tabled”, adding that the opinion sent to the department was a “desperate attempt by the Central Bank to halt important legislation”.

The Banking & Payments Federation Ireland said that its member banks have “very serious concerns” about the proposed new laws as they would “seriously undermine the ability of banks to access wholesale markets for funding purposes and their ability to sell portfolios for the management of non-performing exposures – all of which is of critical importance to banks, financial stability and the wider economy”.

A spokesman for the Department of Finance said that a memorandum on the Bill will be submitted to a Government meeting this week.

8 Trade with Britain will not return to pre-Brexit model, exporters warned

Flutter’s revenues rise but profits down due to charge related to Stars deal 07:32
Bank branch closures, Dublin gains from Brexit, and independent living options 06:30
Investor seeks winding up of Irish firm linked to German property venture 06:00
Employer offering to pay Covid tax but Revenue can’t give me the bill 05:59
Bars still generating revenue despite lockdown, but from what? 05:32