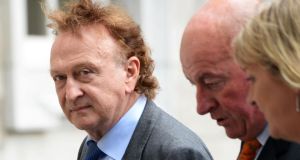 Irish developer Seán Mulryan does not believe that he or his company, Ballymore Properties, played any part in the crash of the State’s property market in late 2008.

“If I didn’t pay my debt back I’d say I did [play a role],” he told the Oireachtas banking inquiry on Wednesday. “But I don’t think so.”

Mr Mulryan said he had paid a “huge price” from the property and banking crash but he was paying all his debt back and “that to me is the most important thing of all”.

“All of my executives took a 25 to 30 per cent reduction in their wages,” he added. “They rolled up their sleeves for seven years and sacrificed everything in time to get through this. To get our mountain of debt taken down and paid back, which was huge at €2.2 billion.

“We all sacrificed our lives. No social lives, no holidays. We just worked around the clock for the last seven years.”

Mr Mulryan said Ballymore Properties had “grave concerns” for the outlook for the Irish property market from 2007 and believed the country was producing 30,000 more units than were needed to meet housing needs from 2006 onwards. By 2006, Ballymore had largely ceased investing in Irish property and some 85 per cent of its assets were overseas by the time of the crash in late 2008.

Ballymore built just 225 units in Ireland in 2006, a year when about 90,000 units were constructed in the country.

In spite of this, Mr Mulryan confirmed it was a bidder on big-ticket deals in the years before the crash, including the Ballsbridge hotels acquired by Seán Dunne, and the Burlington hotel site in Dublin.

He said Ballymore was 35 per cent off the highest bids at the time.

“With the Burlington, one of the banks indicated to me that we weren’t doing much in Dublin and we should do more in the Dublin market,” he said.

The Ballymore founder said he had never anticipated the banking collapse and thought the crash in prices might be of the order of 25 per cent rather than the much steeper fall that had occurred.

Mr Mulryan said Ballymore was better placed than some of its rivals to recover due to the fact that it has substantial assets in London, where the market continued to perform well.

He said Ballymore entered the National Asset Management Agency with a “very detailed” business plan and it had co-operated fully with the State agency.

“While it has been a most painful and costly process for Ballymore, our strong asset base, especially in London, has allowed us to sustain the core business, begin raising equity and finance from new international joint-venture partners and to regroup, ensuring the future viability of the business and accelerate our exit from the Nama system,” he said.

Mr Mulryan said he was “looking forward to paying its debts relating to its Irish bank borrowings, exiting [Nama] soon and returning to a normal market model”.

Its total debt by September 30th 2008 was €2.4 billion, including €1.18 billion with Anglo Irish Bank. Other lenders included AIB, which was owed €400 million; and Irish Nationwide Building Society, which was owed €288 million.

In his opening statement, Mr Mulryan detailed €128,112 paid in political donations to Irish parties. This included €71,102 to Fianna Fáil and just under €25,000 to Fine Gael.