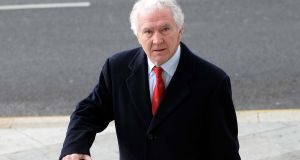 Former Anglo Irish Bank chairman Seán FitzPatrick has lodged revised plans for his new home near Greystones in a bid to address Wicklow County Council’s “privacy” concerns over the plan.

Last January, the council told Mr FitzPatrick that he was unlikely to receive planning permission for his new home if he could not address the council’s privacy concerns.

The planning authority placed the plan for Meadow Garden, Farm Lane, Greystones, on hold in January after one neighbour, Fintan Graham, lodged an objection claiming that the proposal would negatively impact the residential amenity of nearby existing dwellings.

The planning consultant for Mr FitzPatrick, Kevin Hughes of Hughes Planning and Development Consultants, has now told council planners that “the appropriately scaled development will not give rise to any undue impacts on the amenity of any adjacent properties”.

Key revisions to the original plan include the use of boundary hedging, fewer windows on two sides of the property facing neighbouring properties and the reduction in size of a first-floor terrace.

The FitzPatrick plan consists of four bedrooms, including two en-suite, at ground level with each bedroom having access to an external terrace.

The new four-bedroom home is to replace a single-storey, fire-damaged dwelling known as Meadow Garden.

The FitzPatricks held on to their home, Camaderry, next to Greystones Golf Club after Mr FitzPatrick was declared a bankrupt in 2010 with debts of €147 million and assets of €47 million in the wake of the collapse of Anglo Irish Bank.