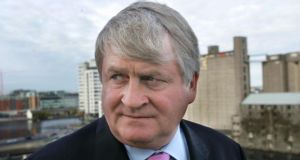 Denis O’Brien has told the High Court he will suffer “irreparable harm” and lose the confidence of his banks if RTÉ is allowed broadcast a report about his private banking affairs with State-owned IBRC.

The proposed report on “the governance of IBRC” is partially based on a letter sent by Mr O’Brien in October 2013 to Kieran Wallace, the liquidator of IBRC.

Mr Justice Donald Binchy, who is hearing the two-day action, yesterday imposed a reporting restriction covering some details of the case.

Michael Cush SC, for Mr O’Brien, said the letter revealed “precise information regarding his historical debts, the repayments he had made, and the balance” due to the bank. It also referred to the repayment period, and Mr Wallace’s position on this matter. The letter concluded with a “request” from Mr O’Brien.

Mr Cush said the letter revealed “nothing untoward”, but an “unknown third party” had passed the information to RTÉ, breaching Mr O’Brien’s rights. He said the broadcast of the letter’s details would cause him “irreparable damage”in dealing with his banks.

Mr Cush said the broadcasting would impact on their “willingness” to deal with him.

The reporting restrictions imposed yesterday do not cover a reference to the same 2013 letter, which was made in the Dáil last week by Independent TD Catherine Murphy.

“The ultimate buyer of Siteserv [Mr O’Brien] was one of the largest debtors of IBRC,” Ms Murphy told the Dáil. “His loans had expired and he had apparently written to Kieran Wallace in his role as special liquidator seeking the same terms IBRC had allowed him, which was to pay off his loans in his own time and at the same low interest rate.”

Michael Collins SC, acting for IBRC, said he “adopted the same arguments” as Mr Cush in relation to the proposed RTÉ broadcast.

“We want to reiterate there is no allegation here of wrongdoing regarding IBRC, the liquidator or Denis O’Brien. Normally, wrongdoing is what you would expect of a public interest defence [for such a broadcast],” said Mr Collins.

Mr Collins argued that RTÉ has made references to “advice” Mr Wallace had received as the bank’s liquidator. The barrister argued this could only be legal advice and said it was “crystal clear” this information should be considered privileged.

David Holland, counsel for RTÉ, said the broadcaster had approached the matter in a “responsible manner”.

“Mr Cush thinks the absence of an allegation by RTÉ against Mr O’Brien is a stick he can beat us with, but I view it as part of a responsible approach,” said Mr Holland.

Mr Holland also said an allegation of wrongdoing is “not necessary” for a public interest defence. He also rejected any allegation RTÉ was trying to “finesse the matter” of publicly revealing Mr O’Brien’s personal finances by referring to details of the confidential information in an affidavit to the court by RTÉ’s business editor, David Murphy.

Mr Holland said RTÉ did not want to be “a clearing house” for other media organisations.

In imposing the reporting restrictions, Mr Justice Binchy said it was significant that Mr O’Brien had not sought in camera hearings or to preserve his anonymity.

The judge said it would “fly in the face of common sense” for unabridged reporting to be allowed, as it would reveal precisely the information that Mr O’Brien was trying to keep confidential.