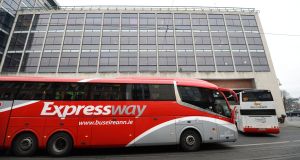 Shane Ross told the Dáil that Bus Éireann was losing €6m a year, mainly due to losses being run up by its commercial Expressway arm

Finding a resolution to the problem of unsustainable losses at Bus Éireann is a matter for management and trade unions, Minister for Transport Shane Ross has indicated.

He told the Dáil that Bus Éireann was losing some €6 million a year, and this was not as a result of the State’s subvention to the company but rather due to losses being run up by its commercial Expressway arm, which faces intense competition from private operators.

Mr Ross did not say whether he supported controversial proposals put forward by management on Wednesday to restructure the company which includes redundancies and cuts to premium payments, allowances and overtime rates.

Bus Éireann has argued that its financial position is unsustainable, and without action to tackle its cost base and inefficiencies it will go out of business within two years.

Unions have promised to resist the company’s plan, which they argue could see a 25-30 per cent reduction to their members’ earnings.

The union groups at Bus Éireann will meet next week to consider a joint strategy, and have warned of potential industrial action over the proposed cuts.

They indicated this could ultimately spread to CIÉ sister companies Irish Rail and Dublin Bus.

A spokesman for the CIÉ group said it would be resuming talks with unions at the beginning of February on the future funding of pension schemes in the group with a view to developing joint proposals.

Meanwhile, Bus Éireann appears to not have ruled out introducing compulsory redundancies as part of its restructuring plans. Sources said it would prefer any severance arrangements for staff to be on a voluntary basis.

Mr Ross told the Dáil that rural communities would not be abandoned as a result of any decisions by Bus Éireann to discontinue operating any existing routes. He said the National Transport Authority had clarified that it could and would “step into any area, assess the transport needs and ensure continued public transport connectivity”.

In part of a speech circulated by the Department of Transport but not delivered in Dáil, Mr Ross said the difficult position being experienced by Bus Éireann should not be underestimated.

However he did not, either in his comments in the Dáil or in the prepared speech, indicate whether he endorsed the controversial proposals set out by Bus Éireann management in its new survival plan.