Notice period may pay off for incoming FBD chief executive 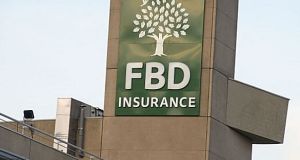 FBD has put a planned €35m dividend on 2019 earnings on ice. File photograph: The Irish Times

AIB deputy chief Tomás O’Midheach went up against Colin Hunt for the top job in the bank early last year. Now he’s accepted a position that, in recent years at least, has been paying almost double the €500,000 Government cap at bailed-out banks.

Better still, before taking over as chief executive of FBD, O’Midheach has had to give six-months’ notice – by which stage some major issues hanging over the insurer may be resolved, one way or another.

First up, in its interim report, published on Friday, FBD said it has now set aside €30 million to cover potential Covid-19 business interruption payouts to pub customers if it ends up losing a test case involving a group of pubs, including the Lemon & Duke pub in Dublin – where former and current rugby players Jamie Heaslip, Rob Kearney, Dave Kearney and Sean O’Brien are part owners.

The figure is higher than the €22 million guided only last month and FBD has warned that there is potential for the final cost to be “significantly” higher.

The case is due to be heard in October.

“Until clarity emerges in relation to business interruption insurance, we expect a period of uncertainty for FBD,” said interim chief executive Paul D’Alton, who stepped in after Fiona Muldoon left in April after more than five years at the helm.

Second, October will also mean a committee of the recently-established Judicial Council submit draft guidelines on court awards for personal injury claims, which are expected by the Government to lead to lower and more consistent awards from the courts – and, it is hoped, a decline in insurance costs.

Meanwhile, there will also be greater clarity around the path of Covid-19 and the impact on the economy by the time O’Midheach takes the helm.

The European Insurance and Occupational Pensions Authority called on insurers in April to hold off in dividend payments amid heightened uncertainty caused by the pandemic. FBD subsequently put a planned €35 million dividend on 2019 earnings on ice.

All going well, O’Midheach could arrive just on time to unfreeze the cash.