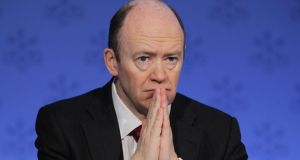 Deutsche Bank’s new head has announced a radical overhaul of the bank’s senior management and structure, parting ways with several top executives and splitting its investment banking unit in two.

The move adds to the upheaval throughout Europe’s big investment banks, several of which are in the middle of restructurings of their own and is the most significant yet by John Cryan, who took over in July as co-chief executive from Anshu Jain. It comes as Germany’s biggest lender is struggling to restore its profitability and reputation in the wake of a series of corruption scandals and missed performance targets.

Deutsche said two of its divisional heads – Colin Fan, who co-heads the investment bank, and Michele Faissola, who runs the asset and wealth management arm – would depart. Stefan Krause, a former chief financial officer, will also leave, as will Stephan Leithner, former head of the bank’s European business outside the UK and Germany.

The exodus of top executives, many of whom came to prominence under Mr Jain, will be accompanied by a radical reshaping of Deutsche’s structure.

The investment bank will be split in two, with the corporate finance business to be combined with Deutsche’s global transaction banking unit to form a new division. The securities trading unit will then stand alone.